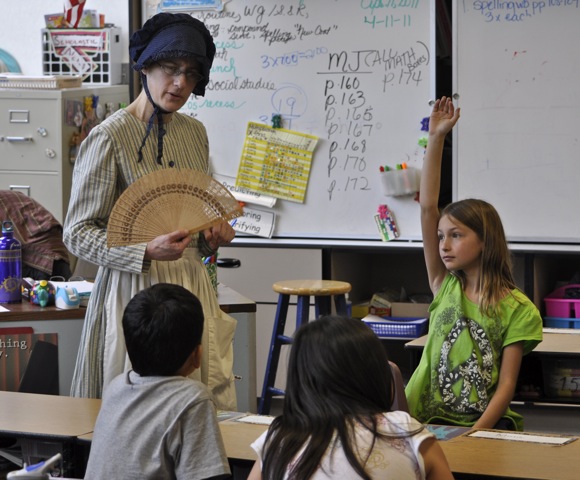 She may really be suburban and 21st century, but don’t tell that to the school children who are enthralled by the tales about being a pioneer who traveled by covered wagon on the Overland Trail to San Francisco. Miss Suzannah, as played by Menlo Park resident Laura Steuer, brings history to life with each 70-minute classroom visit.

Laura was introduced to Miss Suzannah when she was teaching fourth grade. “Diane Claerbout originated the role and came to my classroom,” she said. “The character is hers. I took over the role three years ago when she retired.” 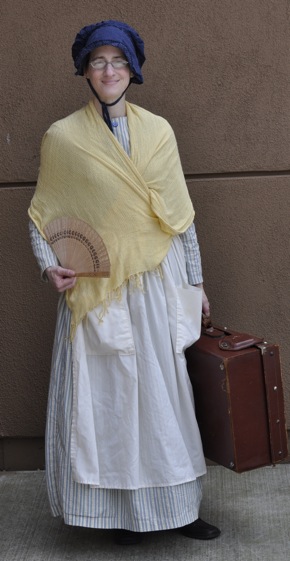 While Diane performed primarily at libraries, Laura mainly does schools. That will change on Monday, May 16 when she will appear at the Menlo Park Library, starting at 7:00 pm, in a program sponsored by the Friends of the Library. In addition to tales of rowdy Gold Rush camps and muddy San Francisco streets, she brings a suitcase full of artifacts, including buffalo hair, fool’s gold, and tintypes.

In mid-April, Laura appeared in various classrooms at Oak Knoll School, the result of a Jeanie Ritchie grant provided by the Menlo Park-Atherton Education Foundation. “I mostly do fourth and fifth grades, but the Oak Knoll assignment includes third grade because of the hands-on-history program funded by the grant,” she said. “I stay busy from February through June, as that’s when most the Gold Rush era comes up in most elementary school history curriculum.”

Laura points out that everything she does is historically accurate, even though her character is fictitious. “I love performing and doing living history,” she said. “This is one of the most fun things I’ve ever done in my life!”

What a wonderful things to do! The gold rush was such an important era. Not only did it jump start settlement of the whole west but it cemented America’s ascension to a world power status. Huzzah, Miss Suzannah.