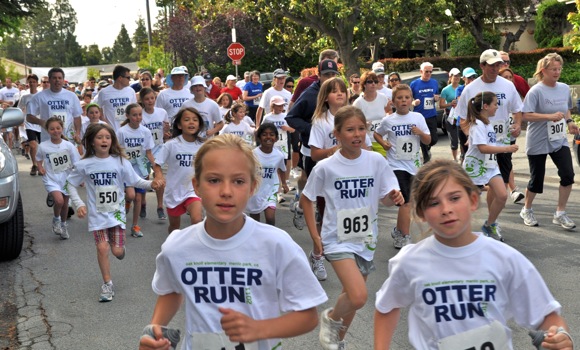 The 17th annual Otter Run that starts and finishes at Oak Knoll School in Menlo Park had the usual assortment of kid and adult runners, walkers, stroller pushers and dogs this morning. But this year it had a dash of the elite in the form of Heather Tanner, who not only won the race but hopes to be on her way to the 2012 Olympics in London.

Heather (pictured right), who lives in Menlo and finished the Otter Run in a 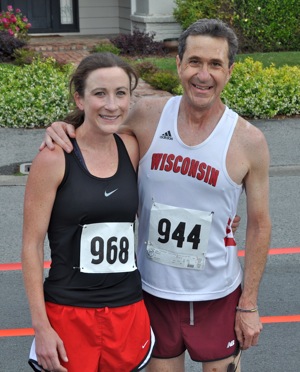 time of “18.05 I think,” has qualified to run in the Olympic Marathon Trials that will be held in Houston in January 2012. “I qualified in 2004 when I was a member of the Nike Farm Team but have focused more on my business career the past few years,” said the graduate of UNC and Stanford. Her current qualifying time is 2.43.40, almost a minute faster than seven years ago.

John Hale (pictured with Heather), who came in second to Heather and was the first male to cross the finish line, is a long time participant in the Otter Run. “My kids all went through the Menlo Park schools and I think I’ve been running this race since it started,” he said. “Nowadays I usually run against ‘old guys.’ But today being behind an Olympic runner by 35 or 45 seconds, well, I’m all right with that!”

John added that the highlight of his Otter Run career was the year one of his sons, 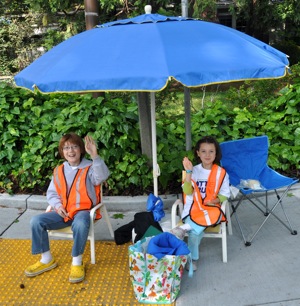 who had just graduated from Menlo-Atherton High School, took first and he took second.

The annual Otter Run marks the end of the school year in the same way the Nativity Carnival, slated for June 10-12, heralds the beginning of summer. It gives young kids the chance to experience distance running in a fun, supportive atmosphere and is well-managed by a corps of volunteers, sporting orange vests. Every kid who completed the one loop distance received a finisher’s ribbon. Those who competed in the 5K today were eligible for prizes from Fleet Feet Menlo Park.

This is the ninth year Katie Ferguson and Sally Osterberg have co-chaired the event. This year over $20,000 was raised for the Oak Knoll PTO.