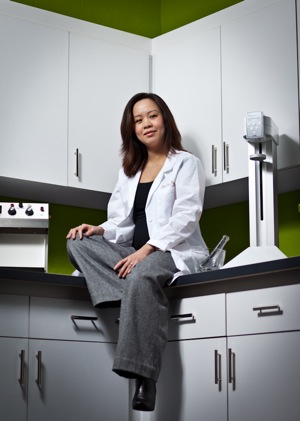 Most chemists like to mix things up. Lynn Pham is no exception. During her undergraduate years, she loved chemistry so much that she finished college in two and a half years.

After graduation, she landed in a lab, but soon discovered she’s too much a people person to work in such an isolated setting. So she decided to get a Doctor of Pharmacy degree from UCSF. Now the chemist/pharmacist has opened what will be — at least initially — a compounding-only pharmacy in Menlo Park.

Nuleaf officially opened its door on June 1 but has been two years in the making. Lynn wanted to find the right location and Menlo Park fit, both for its demographics and a space on El Camino that met her square foot requirements. Having been vacant for over a year, it also fit her budget, partially because it has no adjacent parking lot.

“A compounding pharmacy doesn’t need a lot of parking spaces,” Lynn said. “Unlike the business model of regular retail pharmacies, we don’t deal with big volumes of prescriptions.”

Lynn explained that a compounding pharmacy is able to provide customized medications that best fit patients’ needs — be they human or animal — based on a doctor’s or veterinarian’s prescription. “Usually it’s an alternative to manufactured medications,” she said.

Such alternatives are needed for a variety of reason. As example, a person isn’t able to swallow a manufactured pill or is allergic to some part of the inactive ingredients. “We see a lot of activity in areas of women’s health, particularly hormone replacement therapy, as well as chronic pain management.”

While the FDA does not oversee compounding pharmacies — instead monitoring drug manufacturing companies — there are a number of professional associations that provide standards, including the Pharmacy Compounding Accreditation Board, American Health Systems Pharmacists, and the United States Pharmacopeia.

Lynn realizes that there are hurdles in launching a business, particularly one that offers services unfamiliar to both consumers and health care professionals. “We realize we need to spread the word to inform local doctors that there’s a different tool available to them that they can use in treating their patients,” she said. “But it can be done — I know it!”