Yoga returns to Menalto Station in the Willows 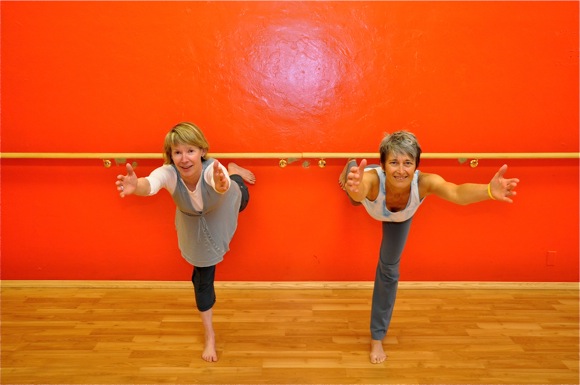 Yoga devotees in the Willows neighborhood of Menlo Park had gotten used to the convenience of a studio located at the corner of Menalto and Gilbert. But that changed when Be Yoga moved to Palo Alto earlier this year. The space was soon rented by Captivating Dance by Nona, which, while a boon to dancing children and teens, didn’t fill the yoga void.

Now yoga is back thanks to a teachers Cheryl Acheson (left) and Cristina Garelli, who run separate but cooperative classes in the space. “I got started at Be Yoga,” Cheryl says, “and many of my students didn’t want to move to Palo Alto. So the opportunity to sublet from Nona Ybrarra was the perfect solution.”

Cheryl teaches both privates and small groups, specializing in Iyengar and Anusara. She said she got into yoga personally when she reached middle age and wanted to reduce the stress of everyday family life. In addition to regular classes, she belongs to a group called Yoga Bear that offers cancer patients (with their doctor’s permission) and their caregivers free yoga classes.

“I can see myself in yoga for the rest of my life” she says.  “I couldn’t do a hand stand when I was 15 or 50, and I’m proud I can do one today. But it’s more about the community rather than the handstand. You never know who is next to you on the mat, but they are likely to have an incredible story. Plus, I like that yoga is not competitive. It’s more about getting the confidence to use your body.”

Cristina, who concentrates on Hatha and Iyengar, started practicing yoga many years ago when she had small children. She became increasingly passionate about the discipline, to the extent that she now considers it a way of life. Her classes are donation based; after expenses she donates proceeds to a different charity every month.

“For me, yoga has allowed me to build an awareness in myself and in my body,” she says. “This awareness is unbeatable. It allows you to find a power in yourself and then use it. It really gives you tools to change.”

Yoga makes me ride my bike faster. Nice article. And Cheryl is the best!!!!