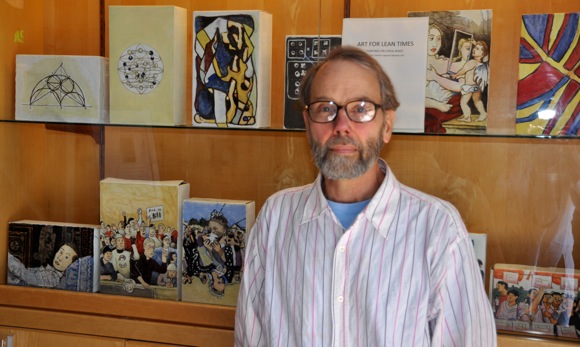 Donald Wallace, a Menlo Park resident since 1980, recalls that he was always drawing when growing up in Knoxville, Tennessee. “People would have said I’d be an artist when I grew up, not the biochemist that I became,” he said. “I even won a children’s art contest for a drawing of a tiger.”

Now retired, Donald is able to devote more time to his artistic pursuits. With a garage full of canvases painted over a lifetime, he turned to painting acrylic on cereal boxes because he says he got tired of paying for stretcher bars.  An exhibition of his cereal box paintings, titled Art for Lean Times, is on display in the entry way of the Menlo Park Library through June 30.

“I come to the Library fairly often, and two or three years ago I saw a notice about the application process to display, so I applied but never heard anything until this past April,” he said. “In the application, I said the purpose of the exhibit would be to ‘amuse the public.'”

Donald, who characterizes his style as a mix of Matisse and fellow Tennessean Red Grooms and “a little bit cartoonish,” explained that he drew the subject matter for the cereal box art from his extensive reading interests. “I read Latin, so am interested in Roman as well as Greek antiquity,” he said. “The Italian Renaissance is another area of interest. Sometimes I use an existing painting or sculpture to draw from, and some are constructed from my imagination.”

Other topics explored in the current exhibit are contemporary China, where Donald and his wife have traveled, and abstract, technical paintings that draw from his career as a biochemist.

“I feel very lucky to been able to display these artworks at the Library as the display space is usually allotted to local community organizations, not individuals,” he said.

What comes next for the cereal box art is unclear: “I really can’t stand the thought of selling them.”

I remember you winning a contest drawing a dragon when we were in the 5th grade. I also remember you teaching us how to draw Donald Duck starting with a ? I loved your cereal boxes.