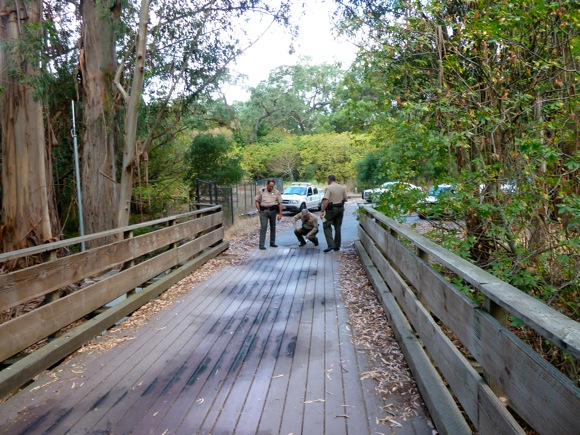 Updated information: Bill Larson, public information officer for the Stanford Sheriffs Department contacted InMenlo to say that the no police department, Stanford or other, had undertaken a test burn on the bridge, saying there must have been a miscommunication. “Police personnel, not police officers, were on the ridge top installing a new antenna,” he said. Due to the seriousness of the vandalism, an arson task force has been set up, according to Larson. (The original post follows.)

An investigation is underway into the burning of the Piers Lane bridge, which is the entrance to the Big Dish area off Alpine Rd. in Menlo Park. The fire caused superficial damage to the bridge, which is made of a composite material, not wood.

Early morning exerciser John Pencavel (right), who lives nearby and walks/jogs the Dish 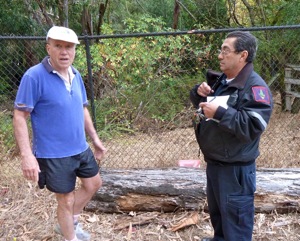 regularly, noticed the burning smell and charred bridge and brought it to the attention of Stanford security guard Jim Vidal. Pencavel also spotted a red gasoline container [just behind the log] discarded in the nearby brush that he said he didn’t think was there yesterday. Vidal called the Stanford Sheriff Department, the investigating agency along with the Palo Alto Fire Dept., shortly after 7:15 am. The Piers Lane entrance to the Dish land was closely shortly after that.

Another early morning exerciser, George Caryotakis, who arrived before the investigation got underway but had noticed the burned patches on the bridge, was walking on the ridge of the Dish when he spotted a work crew with a cherry picker truck. He stopped and asked them what they were doing and if they knew about the charred bridge below. “The man, who was in plain clothes, said he was a policeman and that they were putting up a new police antenna on the ridge top,” Caryotakis related. “He said he knew about the bridge because the police had burned it in a test.” On his way out, Caryotakis told investigating officers what he’d learned.

A phone call to the Stanford Sheriff Department’s public information officer revealed no further details. We’ll update readers as new information becomes available, including when the Piers Lane bridge is expected to reopen.

Mr. Larson is splitting hair. The gentleman on top of the ridge was not, in fact, a policeman in uniform. But he did tell me he worked in the Stanford police department, and was repairing a police antenna. He also did tell me he knew about the bridge fire, and that it was set as a test. Nobody else, apparently, extinguished the fire, so it is plausible that putting it out was part of the “test”, as it should have been.