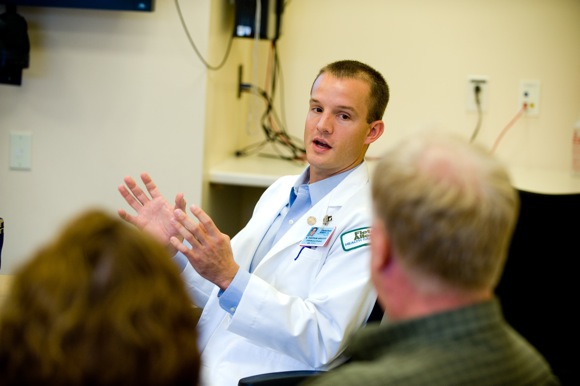 Tris Arscott, who grew up in Atherton and is a fourth-year University of Vermont medical student, has been named a Howard Hughes Medical Institute-National Institutes of Health (HHMI-NIH) Research Scholar for 2011-12. Tris, one of 42 students to receive this prestigious honor, just began the program on the NIH’s Bethesda, Md., campus.

Established in 1985, the HHMI-NIH Research Scholars Program provides outstanding students at U.S. medical schools, as well as dental and veterinary students, the opportunity to receive research training at the National Institutes of Health in Bethesda. Scholars spend nine months to a year on the NIH campus, conducting basic, translational, or applied biomedical research under the direct mentorship of senior NIH research scientists. The Howard Hughes Medical Institute provides the administration and funding for the program, including the salaries and benefits for the Research Scholars; the NIH provides advisors, mentors, laboratory space, and equipment and supplies for laboratory work.

Tris is working in the laboratory of Kevin Camphausen, M.D., head of the Imaging and Molecular Therapeutics Section and chief of the Radiation Oncology Branch of the National Cancer Institute at the NIH, performing translational research. Camphausen’s lab focuses on various effects of radiation on brain tumors and determining how those effects are or can be modified. Tris will conduct research related to glioblastoma,  the most common type of malignant brain tumor in adults and a particularly fast-growing cancer that doesn’t respond well to treatment.

For his specific project, Tris will investigate how radiation influences the production of small particles called microvesicles in glioblastoma cells. According to Tris, these microvesicles were discovered over two decades ago but only recently regained popularity in the cancer literature.

“In glioblastomas, theses microvesicles have demonstrated an ability to transfer information between cells within the tumor, in the tumor micro-environment, as well as to distant sites in the body,” he explains. “We are hoping to understand how radiation modifies this unique method of inter-cellular communication in order to identify novel targets for therapies.”

As a HHMI-NIH Research Scholar, Tris lives with the other 2011-12 Scholars on the NIH campus in Bethesda, in what is called “the Cloister,” a facility adjacent to the lab where he is working, a design that he says helps stimulate regular, but informal, research conversations among the scholars.

“It is really exciting to be in the heart of where much of the cutting-edge research in the U.S. and the world is taking place,” says Tris, who attended Menlo Park elementary schools and graduated from Menlo School, where he was senior class president.  “Just being here, surrounded by amazing science and some of the brightest minds discovering new treatments for obscure or challenging diseases, is amazing.”