Edith Bergstrom: Showcasing the whole world (of palms) in her back yard 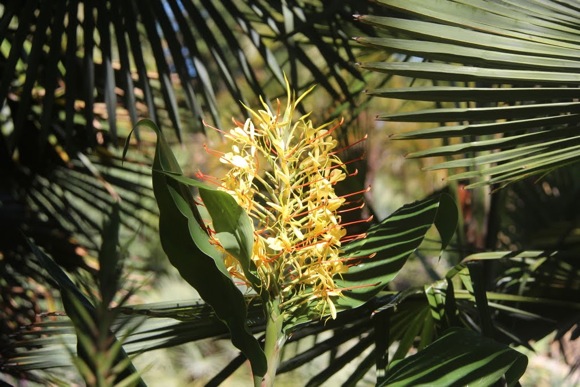 Growing up on a farm in the Imperial Valley, Edith Bergstrom was surrounded by palms. But they didn’t really capture her interest until she began painting and returned to the desert valley to visit her parents. 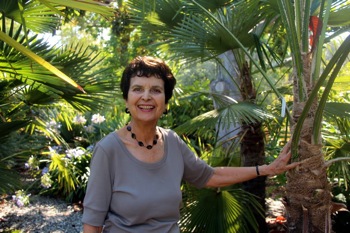 “I was wandering around taking photographs because I was doing watercolors,” she recalls. “To me, the most interesting thing I found were palm trees. At Stanford [graduate school] I was an abstract expressionist. But there was something that struck me about the design of a palm trunk. I did a watercolor and submitted it to the American Watercolor Society annual show in New York. The painting was accepted, and I thought, ‘I’m going to paint more of these!'”

That the “palm thing” stuck is a bit of an understatement. They are not only the primary subject of her large oils on linen, but the Atherton resident finds herself surrounded by 400 palms representing 150 outdoor and 25 indoor species from almost every continent. It’s like the whole world in one back yard.

“Palm collector and palm painter — it’s sort of a marriage,” she says.

Edith buys her palms primarily from nurseries in the San Diego and Los Angeles area and also raises palms from seeds. Her palms come from rain forests, desert climates, and mountains. “Some want water, some don’t want their feet wet,” she says. “Some want shade and others sun. I try to accommodate them all.” 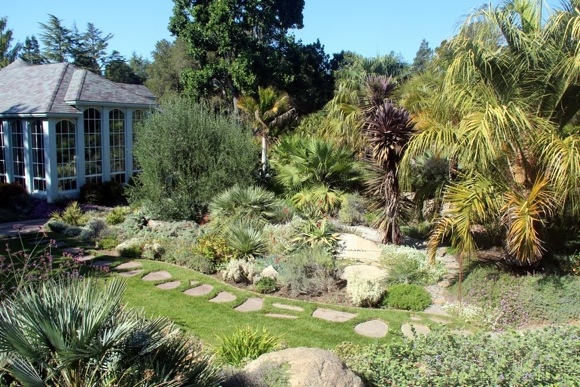 Not surprisingly, Edith possesses an encyclopedic knowledge of palms, explaining to her visitors that they are a very ancient plant. She can name every different palm in her two gardens, one more traditional and the other a wilder jungle.

“My original palm garden has many plants you see in a typical Atherton garden,” she says. “To those more traditional plantings, I added palms, agave and succulents. The newer garden has many changes elevation, up to 15 feet in places. Where there was once a pool, the garden dips down. I’ll walk a new plant around so it can tell me where to plant it.” 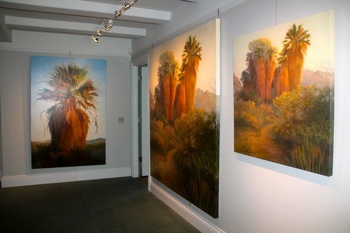 Today, Edith is assisted in planning her gardens by Dennis Makishima, an East Bay-based horticulturist known for aesthetic pruning of plants and trees. She’s been in her Atherton home only since 1990 and the newer garden was planted about eight years ago, so most plantings are relatively new, although some trees were purchased when mature. “Dennis tells me this is a heritage garden and I need to plan for the next 50 years,” she says.

Edith the artist continues to paint three to four days a week. She’s also involved in a number of civic and volunteer pursuits. That means she doesn’t spend much time out in her garden. “But I look out at the most wonderful views!”

Hello Edith,
You, your exquisite work, and your garden are blessing all in your community, and beyond. It was wonderful to read this article and see photographs of your work, which Ron and I value and cherish.
We send you our very best wishes,
BettyJo Cost Harrod

BettyJo, thank you so much for your best wishes!

I love Palm trees. I wish there were more pictures of her landscape!

Edith, it was nice to see that you are getting some local publicity. Thank you again for sharing your paintings and palm garden with me and my granddaughter this past summer. She really enjoyed it, as did I. You were very generous to share your passion with us.
Caye

Great pictures. Thanks for sharing these magnificant pictures.

Thanks so much for sending the link in your Christmas letter. I have always wondered how your yard looks with all of the palms.

Your work just gets better and better !!