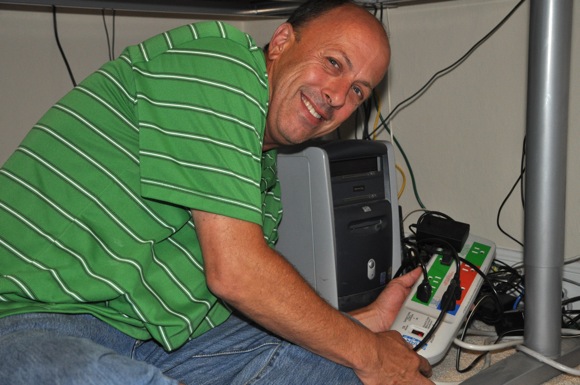 In 20 years as a general contractor, Keith Burtscher has noticed a few things. Like the fact that most homeowners don’t have enough insulation in their attic. And how unpredictable power usage really is.

“Even in the turned off mode, power is being used,” he says. “It’s called a phantom plug load. The fact is that 25% of the electricity in your home is being used by vampire devices. At night, there are little glowing lights everywhere!”

A Menlo Park resident for the fast five years, Keith grew up on the Peninsula and says he knows how homes are built around here. He’s going to bring what he’s learned about local homes and energy usage to a workshop — Secrets of Home Energy Efficiency Revealed — on October 19 that’s offered through the City of Menlo Park.

“My focus will be on what people can do themselves — and I mean realistically do themselves,” he says. “I’ll be talking about the nuts and bolts of what you really need to do to decrease your energy usage.”

As example, he’ll talk about smart strips: “The smart strip monitors the power being used by the master device, and when it drops below a certain threshold set by the user, it turns the power off to the ancillary devices. When the master device comes back on, the smart strip restores power to the others. In addition to the master, there are also some outlets  on the strip that are always on for devices you don’t need/want to be switched on and off.”

Asked what would be one of his highest recommended actions, he answers: “If you have a top loading washing machine, replace it with a front loading machine. They use less water because the swish the clothes around, so there’s less heating. But the big savings comes from the fact that they spin almost all of the water out of the clothes, so there’s much less drying time.”

In summing up, Keith says that there are three criteria that all energy saving measures should meet:

You can register for Keith’s class online,  cost is $25 for residents and $34 for non-residents.