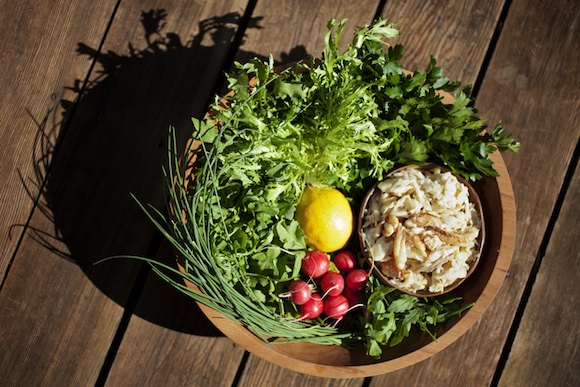 Editor’s note: Atherton resident Gillian Bostock is not only a talented, serious-amateur chef, she’s also an accomplished photographer. This is the second of her occasional recipes for the fall season.

One of my most favorite dishes growing up was crab cakes. When I was 10 years old, in the very peak of my obsession with them and a budding gourmand, my aunt and uncle took me out to a private dining club in London. My overwhelming excitement to go to a dining club quickly turned into silent disappointment when I discovered that there were no crab cakes on the menu. My uncle, who had obviously heard about my crab cake fixation from my mother, pulled the server aside to ask if the chef might accommodate his young niece. Lo and behold, out they came 15 minutes later! Those crab cakes were probably the best I have ever had in my life — those and my mom’s, of course. (Hi Mom!)

My mom’s version is straight out of Cuisine Rapide by Pierre Franey and Bryan Miller and I highly recommend it. In that decidedly French way, the recipe calls for a generous dollop of creamy mustard sauce on top. It’s awfully good.

Well, this is all to say there are still lingering remnants of my past obsession and this salad is one such example. There is indeed cream and mustard involved but, in the salad, the cream serves to actually lighten and hold together the crabmeat while the mustard adds that necessary acidic burst. The frisée affectionately grabs hold to the crabmeat while the arugula brings a bit more oomph to the leafy bed upon which it sits.

Enjoy as a first course before a rich autumnal entrée, such as wild mushroom lasagna as I did this past Wednesday. (Editor’s note: The recreational Dungeness crab season starts Nov. 5; the local commercial season begins on Nov. 15 this year.) 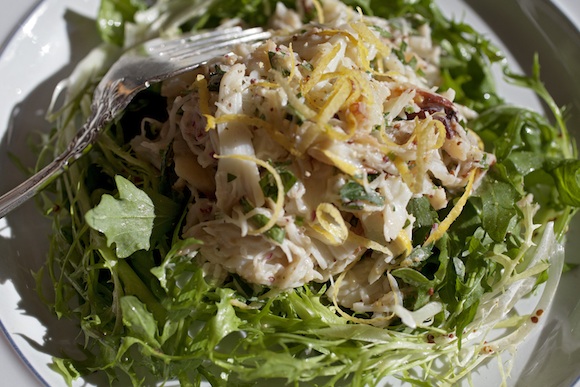 Directions
1. Put heavy whipping cream in a medium bowl and whisk to thicken slightly. About one to two minutes. Add 2 tsp mustard and stir.
2. Add crabmeat, shredded radishes, and chopped herbs. Season with salt and white pepper. Fold together but do not over mix.
3. To make the dressing, add olive oil, lemon juice, sherry vinegar, and 1tsp mustard into a small bowl and whisk until everything is incorporated.
4. In a large bowl, add arugula, frisée leaves, and dressing. Gently toss. Place a large handful on each of the four salad plates. Top each with a quarter of crabmeat salad and a sprinkle of lemon zest. Grind a bit of white pepper on top and serve.