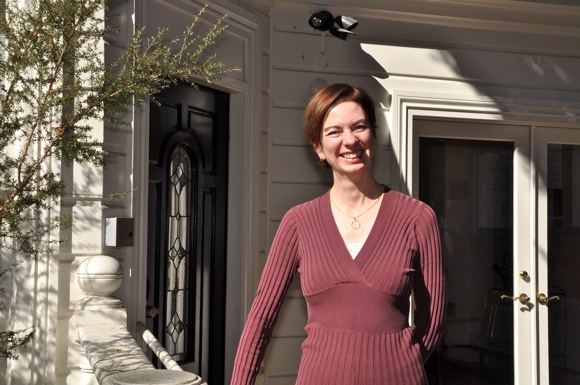 Meaux Costello, president of the Junior League of Palo Alto•Mid Peninsula, is the first to admit that even though the League has contributed more than $4 million to the community and hundreds of thousands of volunteer hours since its founding in 1965, it still suffers from a bit of an image problem.

“We do suffer from the misconception that we’re a  ladies-who-lunch type organization,” she said during a discussion at the League’s office, the Latham-Hopkins Gatehouse in Menlo Park. “But we’re closer to start up incubator than social club. Our goal is to find another non-profit we can partner with to create or enhance a project. We provide grants and volunteers. Then, after a period of usually three years, we launch the project back into the community.”

Meaux, an attorney by trade, characterizes her fellow League members as the “most capable women I’ve ever met.” Dispelling another myth, not all its 200 active members are twenty or thirty-somethings.

“We’ve had provisionals in their 60s, a few of them mother/daughter duos,” she said. “Life circumstances do change and active members move to sustainers, who can still participate in any League project as well as do their own projects.” Currently there are about about 600 sustainers.

These projects are funded with money raised through fundraisers like the upcoming Finishing Touches, a  tour of four holiday-decorated Atherton area homes and boutique scheduled for Dec. 2 and 3. The home tour and all related events are open to public.

As was the case last year, there will be a luncheon and evening event on Dec. 2, which includes the home tour on Dec. 3. New this year are a limited number of self drive tickets and a Saturday morning (12/3) panel discussion about “holiday tips of the trade” from the participating interior designers, followed by a home tour led by the designers.

“Finishing Touches co-chairs Kathleen Castaillac and Helen Ungerman deserve all the credit,” said Meaux “They’ve been working tirelessly for months with their committees. Their the mutual brain trust behind all the new events — they’ve done a fabulous job.

The holiday home tours leave from the Rosewood Hotel in Menlo Park, where the boutique is also located. Tickets for all the various events are available for purchase online.