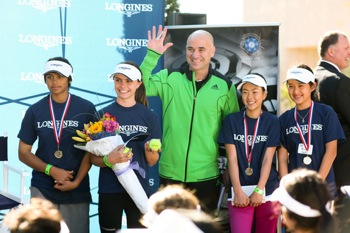 Tennis legend Andre Agassi teamed up with the Swiss watch brand Longines and jeweler Shreve & Co. on yesterday (11/30/11) at the Stanford Shopping Center to host a fast serve contest, followed by a Q&A with USTA junior players to address the importance of education.

She’ll be flown to New York City to compete in the Longines Future Tennis Aces on the Road to the French Open against the top ranked girls ages 10-12 of the USTA Eastern Division in April 2012. These young tennis stars will compete for a grand prize trip to Paris to play on the famous clay courts at Roland Garros with 16 players from around the world. The two finalists of the tournament in Paris will get the privilege to rally with another tennis legend, Steffi Graf.