Noted physicist talks about The Inifinity Puzzle at SLAC public lecture on Dec. 5 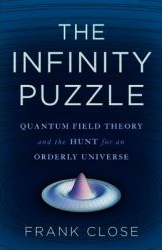 Monday’s SLAC Colloquium will be an insider’s tale of how discoveries made 40 years ago by three scientists led to the construction of CERN’s $10 billion, 27-kilometer-long Large Hadron Collider in hope of revealing how the mass of our universe was born.

Frank Close, a noted particle physicist and popular-science author from England who once served as a postdoc at SLAC in the early 1970s, will speak at 4:15 p.m. on Monday, Dec. 5 in Panofsky Auditorium. The Colloquium is free and open to the public

Titled, “The Infinity Puzzle: From QED to the LHC via SLAC and Scaling,” Close’s presentation is aimed at non-experts. Much of the material comes from his 10th book, published this month, The Infinity Puzzle. In the book, Close draws on his personal knowledge and friendships to explore the work of Peter Higgs, Gerard ‘t Hooft and SLAC Professor Emeritus  James Daniel “BJ” Bjorken against a backdrop of high politics and billion-dollar budgets.

Among many other history-laced tidbits, Close will explain not only what a Higgs boson is, but also why it was named after Peter Higgs. He will aslo give a talk at Kepler’s Books in Menlo Park at 7 p.m. Tuesday.

Frank Close is Professor of Theoretical Physics at Oxford University, Dean of Graduate Studies and Fellow of Exeter College, Oxford. He was formerly vice president of the British Association for Advancement of Science, head of the theoretical physics division at the Rutherford Appleton Laboratory,  head of communications and public education at CERN and interim deputy for science at the U.S. Department of Energy’s Jefferson Laboratory. He has published more than 200 research papers and has authored 10 books, nine of which are popular books on science with such provocative titles as Lucifer’s Legacy, The Cosmic Onion, Apocalypse When?, The Void and Nothing.

As a postdoc at SLAC, Close worked on Compton scattering and the parton model with Stan Brodsky and on the quark model with Fred Gilman. “Being at SLAC in early 1970s felt like being at the center of the universe,” he said. “It was the time when the quark layer of reality was being revealed, and seeing it happen was a great privilege and one of the most exciting memories of my career.”