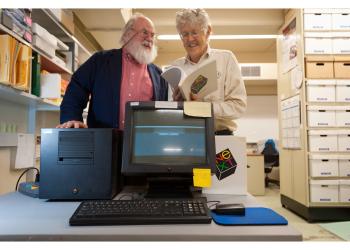 Its creators at SLAC  saw it as a great way to share information among the world’s widespread particle physics community. But World Wide Web creator Sir Tim Berners-Lee calls it the web’s first “killer app.”

On Monday,  North America’s first website – the first site opened outside of Europe – celebrates its 20th anniversary. Intended to ease access to the Stanford Public Information Retrieval System, or SPIRES, the early site since has been outdone by a replacement high-energy physics literature database known as INSPIRE. But its debut on Dec. 12, 1991, got a warm welcome from a physics community starved for a simple way to share research results through a  worldwide database of scientific paper abstracts.

And, boy, was it simple. With just three lines laden with acronyms and two links (one took users to a list of email addresses and the other allowed researchers to search SLAC’s scientific database), the web-based front end for SPIRES had none of the multimedia flash of today’s web.

But it was everything its creators, physicist Paul Kunz and now-retired SLAC librarian Louise Addis, had in mind.

“I can still remember the day Paul Kunz appeared in my office after (a) trip to CERN,” Addis told First Monday, a peer-reviewed journal about the Internet. “He showed me the Web and we started moving right away . . . I’ve always felt deeply indebted to Paul for spotting the potential of the Web for our situation and for helping develop the first Web server at SLAC, which proved that potential.”

For more information, and to see what the first U.S. webpages looked like, visit the SLAC Archives & History Office.