Two sisters make birthdays a time to give, not receive 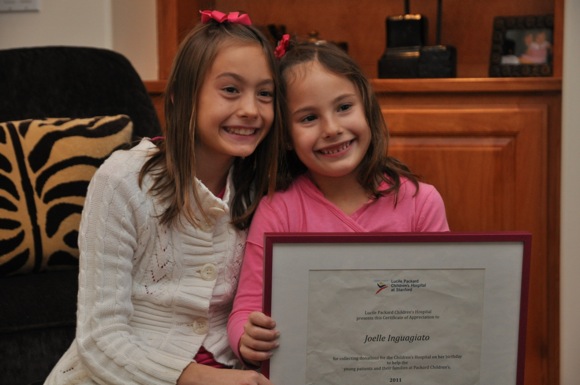 Gianna (age 10) and Joelle (age 6) recently celebrated birthdays. But instead of receiving gifts, they gave them — Gianna to Fit Kids Foundation and Joelle to Circle of Friends, which supports the Lucile Packard Children’s Hospital.

“We are so lucky,” said their mom, Menlo Park resident Trish Inguagiato. “I presented the idea to them and they both said, ‘great.’ Both girls felt they really wanted to do it this year. I didn’t have to talk them into it.”

It was a Fit Kids video that inspired Gianna, who herself plays lots of sports, including basketball, volleyball, and tennis. “My mom showed it to me and I told her I wanted to support those kids for my birthday,” she said.

Joelle was the first of the girls to celebrate a birthday and went to the hospital to present her collected money to Circle of Friends liaison Jennifer Hedmen, who in turn gave her a certificate of appreciation, which she hangs on her bedroom wall — and reluctantly allowed her mother to bring out for a photo, given that it’s become a treasured possession.

“I felt great helping the kids at the hospital,” she said. “I can imagine how hard it is to be a kid in the hospital.”

Trish and her daughters are hoping their story will inspire others to think about alternative giving this holiday season.

We need more kids like Gianna and Joelle. God Bless them Always.