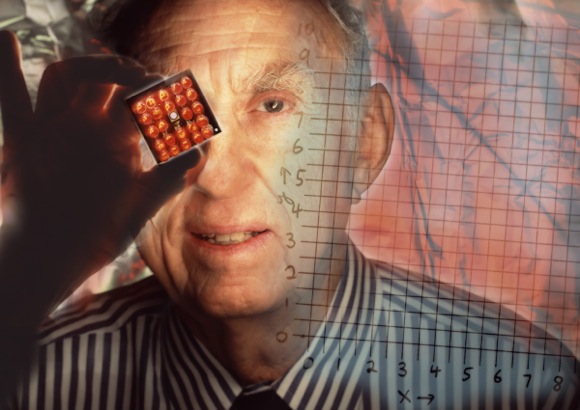 When he’s not actually doing experiments, SLAC physicist and Nobel laureate Martin Perl loves to talk about important trends in physics. For about the last decade, for example, he and his partner Joyce hosted weekly discussions in their home on Friday nights attended by 30 to 50 friends and colleagues.

Now, at 85, Perl has turned to social media to recreate the spirit of those “Friday Set” gatherings: He’s officially a blogger.

His blog, Reflections on Physics … from the Tau to Dark Energy, debuted in October. The title refers to his late-1970s discovery of an elementary particle, the tau lepton, for which Perl received the 1995 Nobel Prize in Physics, as well as to his latest quest: determining if certain aspects of the dark energy thought to make up much of the universe are real.

About once a month, Perl expects to post a 1,000 to 2,000-word essay covering a big-picture topic in particle physics, cosmology or astrophysics. He’s aiming for an audience of technically literate non-physicists. “I’m not interested in competing with the rapid-fact or rumor blogs,” he said. He expects to invite occasional contributions from guest bloggers as well.

In his first blog post – entitled “Faster-Than-Light Neutrinos and the Dynamics of the Internet” – Perl said he thinks the recent claim of neutrinos traveling faster than the speed of light will ultimately be proven wrong, adding that a definitive determination will require new experiments that can take years to design, build and operate. The article included 13 technical paper citations and hyperlinks.

“This faster-than-light report reminds me of the Fifth Force controversy back in the late 1980s,” Perl said, referring to the claim that a new force was responsible for some apparent changes in gravity that other scientists were unable to replicate. “There always seem to be some strange effects that can’t be repeated.”

He added that a dichotomy has emerged between the brief time in which scientists can analyze and critique claims on the Internet and the years needed to perform a real experiment and analyze its data to be sure the result is correct. “We’re impatient for answers, and the Internet gives us the illusion of speed in physics research,” Perl said.

As for his motivation to blog, Perl said, “I have some free time now and thought there is a need for a long-term view of what’s happening in physics. I think I can contribute useful insights to people’s understanding of the process of discovery in physics today.”

He said the highly speculative concept of multiple universes will be the subject of his second post. “I’m initially very skeptical,” Perl said. “But there are some very smart people working on it, such as Stanford’s Leonard Susskind. I’m wondering about what you could see that would indicate multiple universes actually exist.”

It should make for a stimulating discussion.