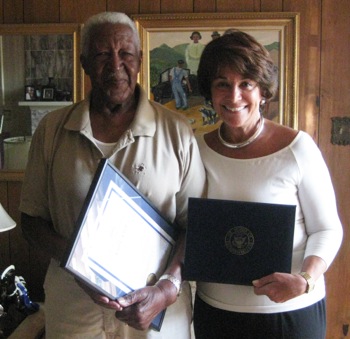 Rep. Anna G. Eshoo announced this week that Carl Clark, a veteran living in Menlo Park, will receive formal commendation awards from the Navy.  Carl Clark, an African-American who served during World War II as an E-6 Steward First Class, will receive and be formally presented with the the Navy and Marine Corps Commendation Medal with the Combat Distinguished Device. Eshoo has worked for the past two years with Clark to ensure that he received the recognition that he, and his peers — all enlisted African-Americans serving in the Navy during WWII — deserve.

After receiving the news, Eshoo issued the following statement and announced formal plans to honor his service and heroism:

“Today, I’m proud to announce Carl Cark is at long last being properly acknowledged by his country as a true American hero who has saved the lives of many of his shipmates and played an undeniably significant role in saving the U.S.S. Aaron Ward over 66 years ago.

“It is a singular privilege to be in a position to correct the record for those who have fought to preserve our freedom. Carl Clark served our nation during a time when the Navy was deeply segregated and a culture of racism was prevalent. His courage stands as a symbol of the greatness of our nation, and this award, also given to Senator John McCain, calls out Mr. Clark as a true American hero.”

The Carl Clark case was complex given the lack of documentation and living witnesses to the events on May 3, 1945, near Okinawa, Japan .  At dusk, the U.S.S. Aaron Ward took direct hits from six kamikaze planes and two separate bombs. Despite great peril to himself and a shoulder injury, Clark alone aimed a fire hose that usually takes four men to control at the smoldering ammunition locker, preventing a fatal explosion that would have surely cracked the ship in two.

After putting out the fire, Carl Clark risked his own life once again by exposing himself to incoming fire in order to aid his shipmates. Despite a broken collar bone and with no concern for his own safety, he carried his fellow injured sailors to safety and sustained fire from the enemy running to and from the aid station.