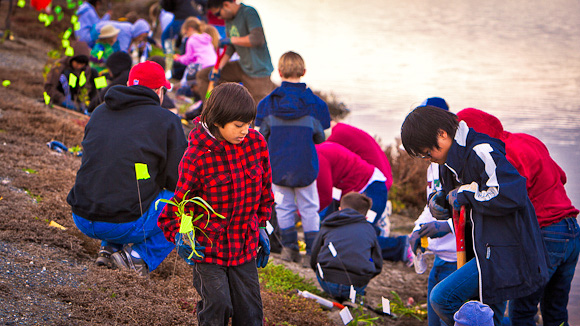 In honor of Martin Luther King Day, Save The Bay recruited volunteers to participate in various projects, including the continuing restoration of the Ravenswood Salt Ponds in Menlo Park.

“This is the second year we’ve involved the community in planting native species,” said Dylan Chapple, a restoration specialist with the organization that was started 50 plus years ago by three East Bay women. “The bigger scope of the project is to provide nesting islands designed for both migratory and year-round birds like Avocets and Black-necked Stilts.”

Planting first began at the Ravenswood Salt Ponds in the Fall of 2010. Last year about 2,000 gum plant seedlings were planted.

“Gum plant is one of the strongest species for transition zones,” said Chapple. “It provides leaf litter and habitat for birds really quickly. When wildlife get pushed out of the lower marsh at high tide, the gum plants are a place of refuge.”

In addition to planting, restoration efforts, which are done in partnership with the U.S. Fish and Wildlife Services, include removing evasive species, primarily ice plant, and cleaning up trash. Today the focus was on planting a new species, marsh coyote brush.

“It’s the first time we’re planting it at Ravenswood,” Chapple said. “Its roots extend under the soil and form a single plant that can cover several feet. In addition to providing refuge during high tide, coyote brush helps prevent erosion on the pond.”

In addition to community wide planting like the one held today, Save The Bay works with social service groups, schools and local companies on specific projects. More information about volunteer opportunities is available on the organization’s website.