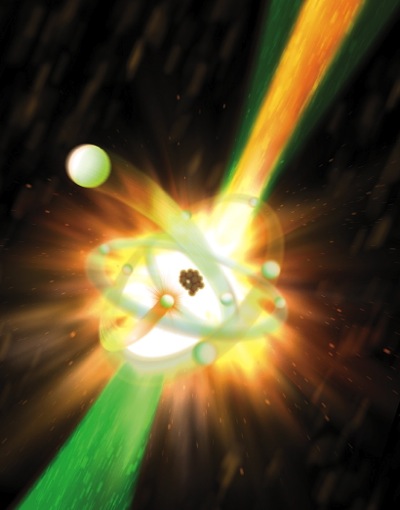 Editor’s note: Some “happened-in-Menlo” news makes headlines worldwide. This is one example.

Scientists working at Menlo Park-based SLAC have created the shortest, purest X-ray laser pulses ever achieved, fulfilling a 45-year-old prediction and opening the door to a new range of scientific discovery.

The researchers, reporting in Nature, aimed SLAC’s Linac Coherent Light Source (LCLS) at a capsule of neon gas, setting off an avalanche of X-ray emissions to create the world’s first “atomic X-ray laser.”

“X-rays give us a penetrating view into the world of atoms and molecules,” said physicist Nina Rohringer, who led the research. A group leader at the Max Planck Society’s Advanced Study Group in Hamburg, Germany, Rohringer collaborated with researchers from SLAC, DOE’s Lawrence Livermore National Laboratory and Colorado State University.

“We envision researchers using this new type of laser for all sorts of interesting things, such as teasing out the details of chemical reactions or watching biological molecules at work,” she added.  “The shorter the pulses, the faster the changes we can capture. And the purer the light, the sharper the details we can see.”

The new atomic X-ray laser fulfills a 1967 prediction  that X-ray lasers could be made in the same manner as many visible-light lasers – by inducing electrons to fall from higher to lower energy levels within atoms, releasing a single color of light in the process. But until 2009, when LCLS turned on, no X-ray source was  powerful enough to create this type of laser.

To make the atom laser, LCLS’s powerful X-ray pulses – each a billion times brighter than any available before – knocked electrons out of the inner shells of many of the neon atoms in the capsule. When other electrons fell in to fill the holes, about one in 50 atoms responded by emitting a photon in the X-ray range, which has a very short wavelength. Those X-rays then stimulated neighboring neon atoms to emit more X-rays, creating a domino effect that amplified the laser light 200 million times.

Although LCLS and the neon capsule are both lasers, they create light in different ways and emit light with different attributes. The LCLS passes high-energy electrons through alternating magnetic fields to trigger production of X-rays; its X-ray pulses are brighter and much more powerful. The atomic laser’s pulses are only one-eighth as long and their color is much more pure, qualities that will enable it to illuminate and distinguish details of ultrafast reactions that had been impossible to see before.

“This achievement opens the door for a new realm of X-ray capabilities,” said John Bozek, LCLS instrument scientist. “Scientists will surely want new facilities to take advantage of this new type of laser.”

So how much closer are we to having Xray glasses?