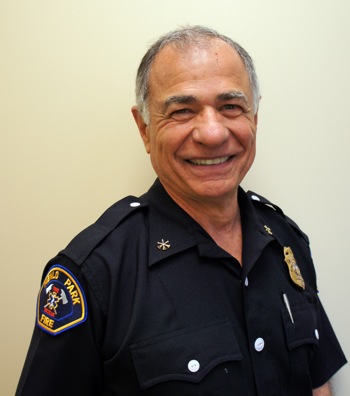 The Menlo Park Fire Protection District has named Manny Navarro as its new Division Chief in charge of Operations. Navarro comes to the Fire District with over 40 years of extensive public safety experience.

He started his career in 1972 as an Oakland firefighter and left the Department in 1994 as the Assistant Fire Chief. During his time with the Department, he managed numerous significant emergencies including rescue operations during the 1999 Loma Prieta earthquake and Highway 880 freeway collapse, Oakland Hills fire storm in 1991, and multiple high rise fires in downtown Oakland.

He left Oakland to become the Fire Chief for the Colorado Springs Fire Department where he managed 20 fire stations, 27 fire companies, 2 trauma units, 508 personnel, and an annual budget of $53 million. In 2008, he accepted a position as the National Vice President of Emergency Medical Systems with American Medical Response Ambulance Company.

In December, 2011 the Fire District conducted an internal and external recruitment for the senior management position of Operations Division Chief. The position works under the direct supervision of the Fire Chief and runs the day-to-day operations of the District’s 7 Fire Stations and 100 personnel who provide emergency services to the communities of Atherton, Menlo Park, East Palo Alto, and portions of unincorporated San Mateo County.

“We’re happy to have Manny back in California and honored to have  him as part of our team,” said Fire Chief Harold Schapelhouman. “His extensive experience, command presence, tactical abilities and people skills will be an asset to our community. He always places the community first and has a deep respect for our profession and firefighters.”