Larry Wong is the go-to food guy at Little House 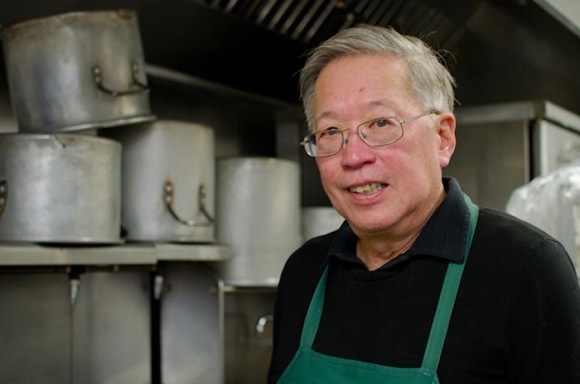 Larry Wong, the chef at Peninsula Volunteers Little House for the past three years, says he’s been cooking since he was 5. “I’m a fourth-generation San Franciscan and learned from my grandmother.”

During a career spent mainly overseeing corporate cafeterias, he’s expanded well beyond his Chinese roots. “I’m interested in a wide variety of ethnic foods and go in spurts,” he says. “My latest is perfecting Jewish knishes as done in Brooklyn.

“I googled the recipe I’m using. To think that I have hundreds of cookbooks, but now I turn to Google for inspiration.”

According to Larry, like many restaurants, the Little House kitchen is striving to do more with locally grown produce. “We get weekly donations from the farmers market and also have a kitchen garden here on the property.” 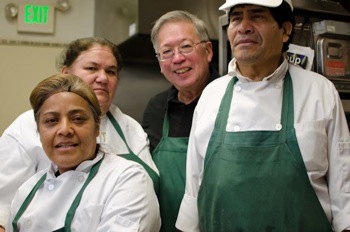 Last year that garden produced 500 pounds of zucchini. Now largely dormant except for an arugula plant that seems to have a mind of its own, Larry plans to start some of the cool weather vegetable like peas, broccoli, and herbs — all from seed —  later this month.

Larry’s interest in gardening comes natural. His first college degree was in horticulture, succeeded by two others in fine arts and hotel/restaurant management. He’s assisted in the garden by a volunteer. “She’s a hairdresser and what she does is coif the garden,” he says.

On Thanksgiving Larry and his staff cooked 50 turkeys, not just for Little House but also Meals on Wheels and dinners at senior centers. He says the busiest lunch of the year, though, is St. Patrick’s Day. “People really turn out for the corned beef and cabbage!”

Pictured with Larry are his staff Maria Martinez, Mercedes Ayala, and Jorge Sosa, who he says are “great to work with” and a “very efficient staff.”