For four decades, Kitty Moore and M-A boys’ soccer have been synonymous 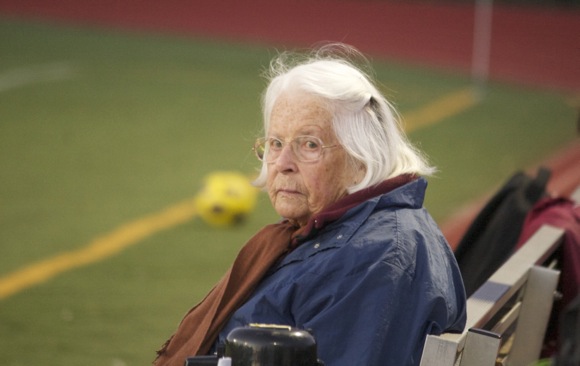 The Menlo-Atherton High School boys varsity soccer team’s recent rise to #8 in California and #26 in the nation has come from a depth of talented players, great coaching, and a cohesion rare among high school teams in the area. Yet, perhaps the greatest story of the season — and indeed the past 43 seasons —quietly sits on the sidelines for every varsity and frosh-soph game.

Katherine Moore, affectionately known as Miss Kitty by some and Señora Kitty by others, is the unassuming heart and soul of the program, working tirelessly for the soccer players. Her work begins before the season starts, as she finds each and every uniform, washes it, stitches it, and gives it to the players before the first game.

During the season, she dedicates every Wednesday and Friday to the teams. Traveling with the players and coaches to both home and away games, she brings along full Gatorade bottles, a cooler of water and cups, medical equipment, and the ever-satisfying box of red licorice for players on the sideline. For nighttime games,  she also brings along hot apple cider and cookies for the team.

Kitty’s son Tom, an All-American soccer player at M-A, arrived in 1969, and that was when she first assumed her unofficial sideline manager duties. In 1975, her younger son Andy arrived, followed by Johnny in 1980, so she remained. During those years she developed a close connection with many of the players, so much so that she found it difficult to leave the school when her sons graduated. So, she stayed.

Since her first season, Kitty has witnessed many changes. She has seen the creation of a girls soccer team and dramatic diversification of her boys’ team. She is now a grandmother, a volunteer librarian at the Oak Knoll library (for 40 years), and a volunteer at the Clifford elementary library in Redwood City. Every Tuesday she delivers food for three homebound seniors.

Yet throughout all these other activities, her dedication to the M-A boys soccer program remained stronger than ever. Today, she is a beloved figure to all those even remotely connected to the teams. From players and coaches to parents and referees, Kitty brings out the best in everyone she meets. She is the heart of M-A soccer, and she asks nothing in return.