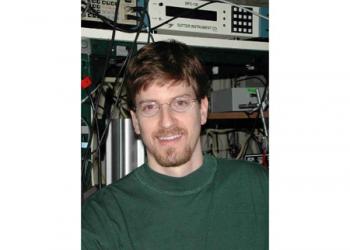 Mark Schnitzer, associate professor of biological sciences and of applied physics at Stanford, will deliver the Feb. 13 SLAC Colloquium, “Of Mice, Men, and Microscopes: Watching Brain Dynamics at the Cellular Scale in Behaving Subjects.”  His talk, which is open to the public and intended for a general audience, begins Monday at 4:15 pm in Panofsky Auditorium, with refreshments served beforehand at 3:45 pm.

A longstanding challenge in brain science is to understand how populations of individual neurons and glia contribute to animal behavior and brain disease. Until now, addressing this challenge has been difficult. Researchers don’t have the imaging technology they need in order to visualize cellular properties in animals that are awake and active over long time periods.

Schnitzer will describe one- and two-photon optical approaches to studying cellular dynamics in the brains of actively behaving mice. Using these approaches, his lab has probed neural coding schemes involved in motor control and spatial navigation. The lab has also applied minimally invasive optical imaging techniques in human volunteers for studies of motor control at the cellular scale.

An associate professor with joint appointments in the Departments of Biological Sciences and of Applied Physics at Stanford, Schnitzer is also on faculty at the university’s School of Medicine, as well as the Stanford Neuroscience Institute. He has longstanding interests in neural circuit dynamics and optical imaging.