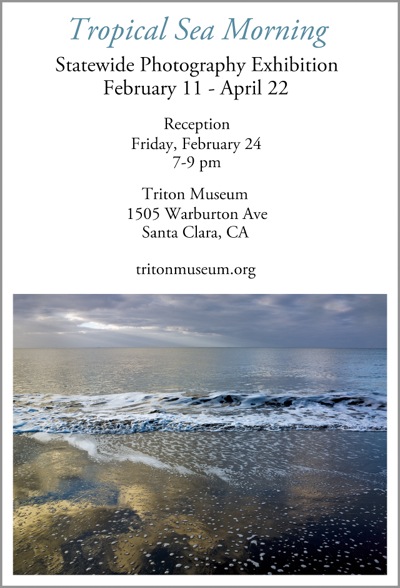 A photo taken by Menlo Park-based photographer David Hibbard has been juried into this year’s statewide photography exhibition at the Triton Museum (1505 Warburton Ave.) in Santa Clara. The exhibit runs through April 22; a reception will be held on Friday, Feb. 24 from 7:00 to 9:00 pm.

David was good enough to tell us about the image and how it came to be:

“Its title is Tropical Sea Morning. It is one of an ongoing series of sea and sky landscapes that I have taken over the years on that particular beach in Waimea, Kaua’i. My wife Jane and I go there every winter on an artistic retreat with a group of artists whom Jane studies with.

“I shot this particular image early in the morning. A storm had passed through overnight; by the time I got out there with my camera the sun, which had started to break through the clouds, was painting the sea with brilliant flecks of silver. The scene was too gorgeous to ignore!

“I took the picture with a Mamiya 645AF II camera fitted with a PhaseOne P45 digital back. The exposure was f/11 at 1/40 second at ISO 100. The biggest problem in taking the shot was timing the movement of the waves. I wanted the wave and foam patterns to echo — if possible — the patterns of the clouds; I also wanted the wet sand to show as much of that gorgeous cloud reflection as possible. Of the dozen or so shots that I took I liked this one the best.”