It’s a cream puff kind of day at Hillview School, thanks to innovative teaching and Chef Suzy 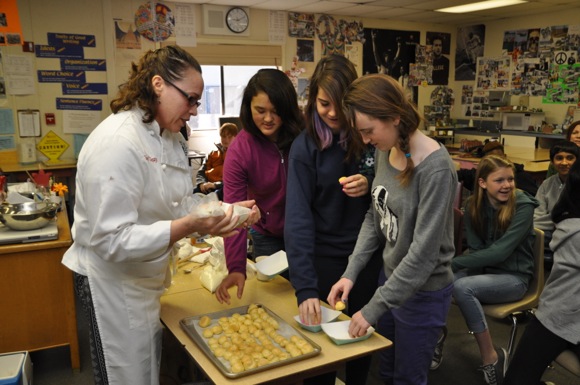 The Hillview School 7th graders in the Mediterranean Academy  in Michael Kaelin’s English class just finished reading the novel The Wednesday Wars by Gary Schmidt, which is set in 1967. And today they made cream puffs in class, orchestrated by Chef Suzy Farnworth. The connection?  Michael provides some background about the book:

“After an afternoon of slapping chalk erasers together (yes, I have to explain that to the kids) a rogue wind current carries the dust through an open window and the puffs become pastries of choking death. Thus our 7th grade protagonist accidentally ruins 12 platters of cream puffs slated to be given to the Vietnam Veterans Wives Group.  In an effort to make restitution to his friends, who threatened him with death should he not give them one of the delectable cream puffs that he has been stewarded to protect from harm, he needs a plan. 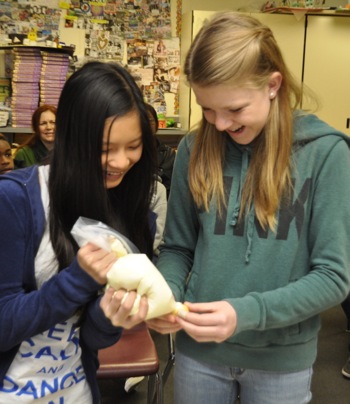 “He has no money but he gets an unpaid gig sweeping at the local bakery. The chef just happens to be the director of the local theater. Our hero promises to the play the role of the fairy Aerial in Shakespeare’s The Tempest for cream puffs.  He finds fame, embarrassment, insight into family, friends, and teachers, and passion for Shakespeare like he never thought possible but not before a second batch of cream puffs gets eaten by two ex-classroom rats.”

In talking about the book with his students, Michael discovered that not only was the notion of a blackboard eraser foreign to then, they didn’t know what cream puffs were. “They were key to plot but how could they really understand without experiencing the taste and texture of a cream puff,” he thought.

Thanks to Chef Suzy (whose twin sons are two of Michael’s students) they learned today. She brought in miniature unfilled puffs, talking through exactly what choux paste is and its use in cream puffs and profiteroles (the latter is on the menu at her next Junior Chef Cooking Camp.) She demonstrated how easy it is to whip cream, using just a wire whisk. The kids then filled two puffs each, one with pastry cream and the other with Chantilly cream. Then they dusted them, but, unlike the book, this dust was edible powdered sugar.

The results: a totally engaged classroom of students, at least during first and second period when we visited. When asked how the cream puffs served as a catalyst in the book, one practical-minded student replied, “We got to do this [make cream puffs] today!” 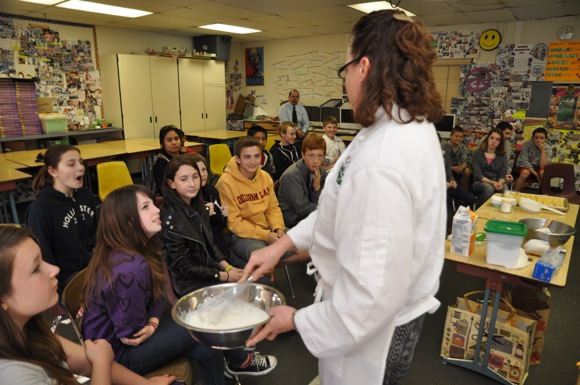