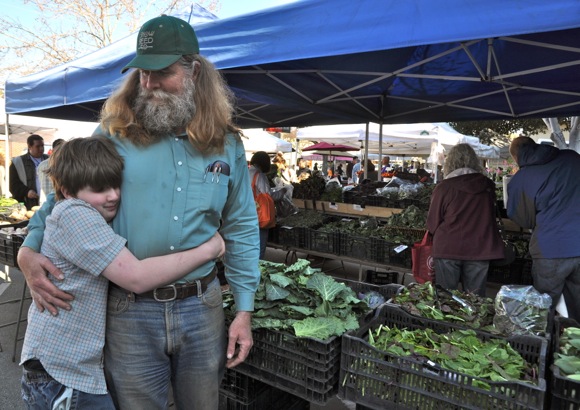 It’s hard to figure out what Grant Brians loves to do more — farm or talk to people about the fruits of his labor. He was holding forth this morning at the Menlo Park Farmers Market, talking to customers who had stopped by to peruse the many varieties of greens and root vegetables grown at one of the two family farms run by Heirloom Organic.

Brians Ranch was ahead of the curve in its efforts to farm organically, which it has been doing since the mid-1970s. It has the distinction of being the first farm in the Santa Clara Valley to be organically certified by CCOF.

Now a full time farmer, Grant (pictured with his son above) spent 20 years in hi tech, farming on the side. “I was mostly involved in trouble shooting,” he said about his tech career. 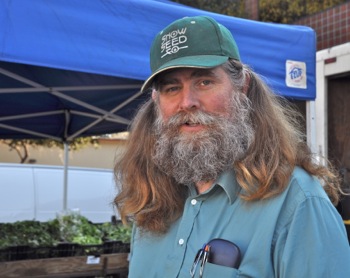 He believes that farming is in his blood, even though neither of his parents were farmers. It was Grant who got his mother involved, his father on a more limited basis.

To frequenters of the Menlo market, Heirloom Organics is known for its wide variety of greens. “We grow and sell more than anyone else who is bringing crops to market in Northern California,” he said. “I try to do as many as is feasible because I love flavor and I love to eat tasty things.  Once a year we do a count of all the greens, root vegetables, and vine crops we grow, and it’s now well over 200.”

The wide variety necessitates crop rotation, which also decreases the likelihood of pest buildup in the fields, which total six, two that the family owns and four that they lease. As they farm year round, they have a permanent workforce.

When asked if he had a favorite, Brian replied, “That’s impossible, there are so many that I love I could never limit myself to even two or three. There are too many great tastes!”

That’s a really cool story about Grant. It’s always wonderful to read about farmers who have been doing it for a long time, especially those who have been performing sustainable or more beneficial farming, before it was the “cool” or “right” thing to do. Innovative farming is essential for the industry.