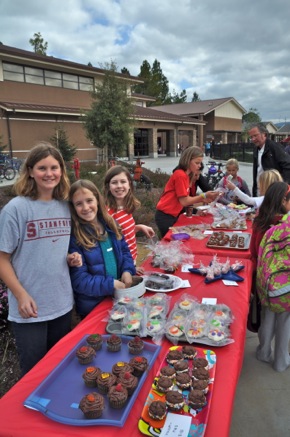 It wasn’t cookies that members of Girl Scout Troop 1486 were selling after school today at Oak Knoll but their own homemade treats, a fundraising effort for local non-profit, My New Red Shoes.

Did they know that the Girl Scouts were founded 100 years ago today? “Really?” was their joint reply.

For those not up on Girl Scout history, Juliette Gordon Low assembled 18 girls in Savannah, Georgia, for the first local Girl Scout meeting on March 12, 1912.  With the goal of bringing girls out of isolated home environments and into community service and the open air, Girl Scouts hiked, played basketball, went on camping trips, learned how to tell time by the stars, and studied first aid.

Today, Girl Scouts of the USA has a membership of over 3.2 million girls and adults in every residential zip code and in 90 countries. Nearly 60 million living women in the U.S. today are Girl Scout alumnae.