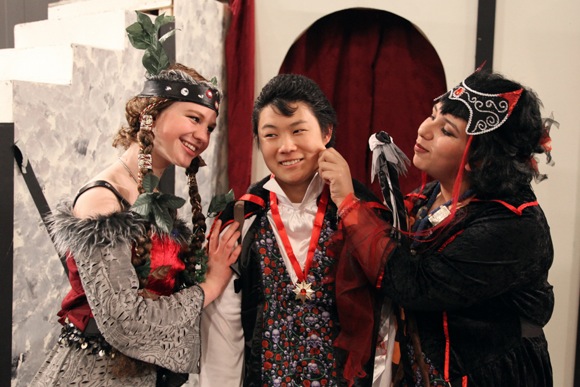 For Hanna Berggren (photo left), it’s the chance to play a nice girl. “I’m Princess Winnifred the Woebegone,” she says, explaining her role in the Menlo-Atherton High School spring musical Once Upon a Mattress, which opens Friday, March 16. “After playing a mean character in Stage Door last fall, it’s nice to be a happy character.”

To prepare for her role, Hanna watched YouTube videos of Carol Burnett, who originated the role on Broadway and later starred in two different TV adaptions. “She is so amazing and certainly my inspiration,” says Hanna.

Once Upon a Mattress is the slapstick retelling of the fairytale The Princess & the Pea. At the center of the musical is a royally dysfunctional family with a control-freak queen, a wimpy prince, and a bumbling king who is cursed to silence. Into their midst comes a feisty swamp princess who insists on being called Fred. The material is family friendly. (Mild caution: one of the supporting characters, the girl friend of a knight, finds herself pregnant.)

Thanks to drama teacher D.J. Zwicker-Sobrepena (Ms. Z) the M-A production has a decidedly different look — Goth. “I love Gothic architecture,” Ms. Z says. “And, I thought it would be fun to bring out the comedy in a different way.”

Playing the role of Prince Dauntless the Drab is Christopher Chau, who’s been involved in seven M-A productions. “Most of the time, I’ve played supporting characters and playing the lead has been an eye-opening experience,” he says. “It’s not only the amount of preparation I’ve had to do. I’ve also gained an appreciation for all the hard work people are doing behind the scenes. I’m getting so much out of being in this show.”

Just under 30 actors appear in the musical. Add the various stage hands, set decorators, and costume makers etc., and the total number of participating students is around 60.

Lissette Espinoza has the role of devious Queen Aggravain (photo right). Like the other actors playing characters from the fictional medieval kingdom, she’s having fun performing with a Transylvanian accent. “Everything about this show is different,” she says. “There’s so much detail that’s gone into the production.”