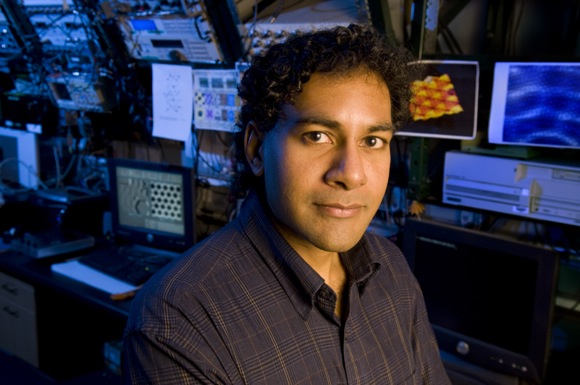 Researchers from Stanford University and the U.S. Department of Energy’s SLAC National Accelerator Laboratory based in Menlo Park have created the first-ever system of “designer electrons” – exotic variants of ordinary electrons with tunable properties that may ultimately lead to new types of materials and devices.

“The behavior of electrons in materials is at the heart of essentially all of today’s technologies,” said Hari Manoharan (pictured), associate professor of physics at Stanford and a member of SLAC’s Stanford Institute for Materials and Energy Sciences, who led the research. “We’re now able to tune the fundamental properties of electrons so they behave in ways rarely seen in ordinary materials.”

Their first examples, reported today in Nature, were hand-crafted, honeycomb-shaped structures inspired by graphene, a pure form of carbon that has been widely heralded for its potential in future electronics. Initially, the electrons in this structure had graphene-like properties; for example, unlike ordinary electrons, they had no mass and traveled as if they were moving at the speed of light in a vacuum. But researchers were then able to tune these electrons in ways that are difficult to do in real graphene.

To make the structure, which Manoharan calls molecular graphene, the scientists use a scanning tunneling microscope to place individual carbon monoxide molecules on a perfectly smooth copper surface. The carbon monoxide repels the free-flowing electrons on the copper surface and forces them into a honeycomb pattern, where they behave like graphene electrons.

To tune the electrons’ properties, the researchers repositioned the carbon monoxide molecules on the surface; this changed the symmetry of the electron flow. In some configurations, electrons acted as if they had been exposed to a magnetic or electric field. In others, researchers were able to finely tune the density of electrons on the surface by introducing defects or impurities. By writing complex patterns that mimicked changes in carbon-carbon bond lengths and strengths in graphene, the researchers were able to restore the electrons’ mass in small, selected areas.

“Our new approach is a powerful new test bed for physics,” Manoharan said. “Molecular graphene is just the first in a series of possible designer structures. We expect that our research will ultimately identify new nanoscale materials with useful electronic properties.”