Photos and blue tape art on display at Menlo College 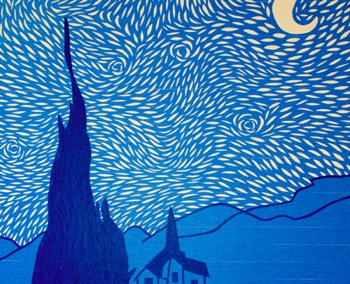 An exhibit in the Outside the Box, Inside the Frame series, which features blue tape art and photographs from the Menlo College Photo Club, is on display through mid-July in the college’s Administration Building.

“We don’t want our school to look just like a lot of business suits,” said Leonard Romero, one of the participants in the blue tape art show. Seven students, each using a different technique and theme, took over a hallway in the Administration Building for two weeks to create images using blue masking tape.

The Menlo College Photo Club used the rest of the hallway to showcase their work, which represents a variety of styles and approaches and includes both digital and film photographs. Most of the images were taken during the club’s photo trips to San Francisco and Filoli.