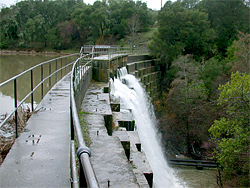 Philippe Cohen, administrative director of Stanford’s Jasper Ridge Biological Preserve, will speak at SLAC on Monday, April 9, about Searsville Dam and the important opportunity it presents for contributing to how watersheds are managed around the country. His talk, part of the SLAC Colloquium Series, will begin at 4:15 p.m. in Panofsky Auditorium, with refreshments served beforehand at 3:45 p.m.

According to Cohen, considerable attention has been paid to the question of what to do about Searsville Dam, located in the 1,189-acre preserve just west of SLAC. He says that discussions too often occur within the context of a poor or incomplete understanding of how the San Francisquito Creek watershed functions and responds to changes.

“Add the many potentially conflicting ecological and resource values, and Searsville is both a fascinating management challenge and an important opportunity to make a significant contribution to how watersheds are managed around the country,” Cohen says. In this presentation, Cohen will describe the important role of Jasper Ridge, how the preserve’s future may be tied to the future of Searsville Dam, and describe how Stanford is going about trying to address this complex challenge.

Cohen is responsible for the continuing ecological health of the Stanford-owned preserve, and the support of its research and educational mission. He is the primary contact for interacting with the surrounding communities on issues of mutual concern. Prior to his current position, Cohen served as the first resident director of the University of California Sweeney Granite Mountains Desert Research Center.

SLAC colloquia are intended for a general audience and are free and open to the public.

For the health of the natural ecosystem and the heritage of the San Francisquito Watershed. Not to mention endangered salm0n, steelhead, red legged frogs, turtles, and the list goes on. Searsville Dam needs to be removed. Imagine extinct salmon, and hundreds of steelhead returning to Corte Madera Creek. After over 100 years, that could be headline news.
On the other hand the dam might offer some flood protection, but in it’s current state there is little to none. The dam could be modified or rebuilt to do both. By cutting a large arch at the base of the dam to allow fish and gravel migration, then installing a large door which could be lowered in the event of a major damaging flood.