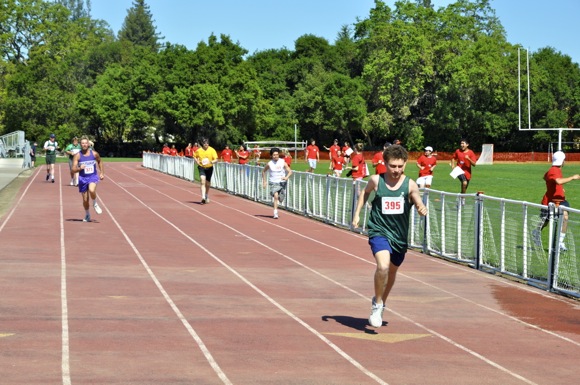 More than 250 Menlo School students are on buddy duty today, assisting the Special Olympics athletes who are taking part in the 21st Northern California Track and Field Meet at Cartan Field through 2:00 pm. The event includes running at various distances — including the 1,500 meter pictured — and field competition including adaptive sports like the popular softball throw. Competitors, who come from San Mateo, Santa Clara and San Francisco County, train for eight weeks to prepare.

Menlo buddies create personal signs and design t-shirts for the athletes. Middle School students host the Olympic Village for athletes to enjoy between their sports events, complete with face painting, snow cones, caricatures and games. For the first time ever, this year Menlo alumni will also participate to support these special athletes. 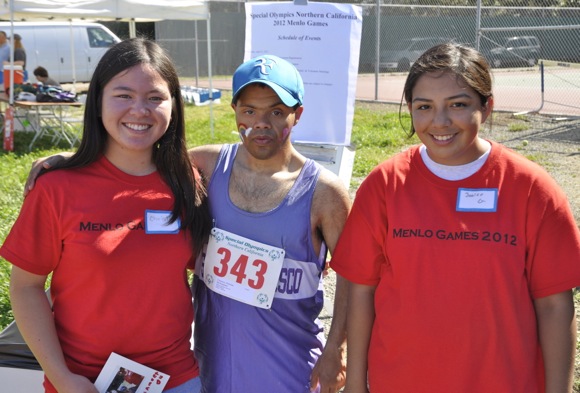 Head of School Norm Colb likens the day to “service learning at its very best” and notes that “this is one of the student body’s most treasured days.” Jessie Brugos, Director of Service Learning at Menlo, says “The students love the interaction with the athletes and prepare weeks ahead by designing t-shirts, creating posters and making personal signs for each Special Olympics athlete.” Jessie first attended the event as a student volunteer herself in 1993.

Cindy Blyther, Senior Regional Sports Director of the Special Olympics of Northern California, notes that “Menlo Games is such a great event with huge community involvement. The athletes love the interaction with the students.”