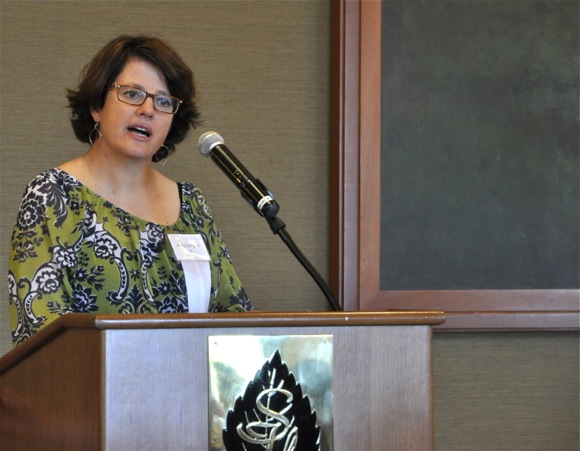 One hallmark of the annual Circle of Friends‘ fundraising luncheon, which benefits Lucile Packard Children’s Hospital, is that attendees go away learning something new. That was true today, thanks to two speakers who shared their families experience with cancer and how that journey shaped them.

Bestselling author Kelly Corrigan was 36 years old and a happily married mother of two when she was diagnosed with Stage 3 breast cancer. Not long after, her father — described as “garrulous Irish-American charmer George Corrigan” — learned he, too, had cancer. “I was thrust into the situation of discovering what it was like to be both my father’s daughter and his kid as a grownup,” she told the audience of about 250 (mostly) women gathered at the Sharon Heights Golf & Country Club in Menlo Park.

From that experience came her first book The Middle Place

— “that sliver of time when parenthood and childhood overlap.” Kelly’s second book, Lift, is written as a letter to her children. The author read from both books. 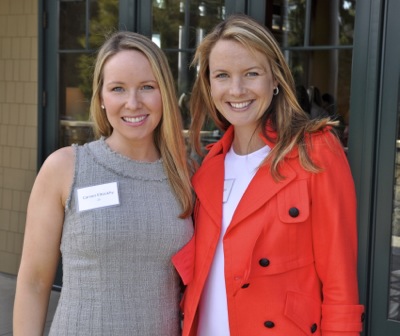 “What was happening during that fall when both my father and I got sick could have been really awful but it turned into something beautiful,” Kelly told attendees. “When I was on the book tour, people shared their stories with me. We’ve all suffered through something and are forever changed because of it.”

Karen Pace, whose son Dylan was diagnosed with Stage 3 cancer in February 2003, also addressed the group. After acknowledging the tremendous group of nurses and doctors at Lucile Packard Children’s Hospital who cared for and treated her son, Karen announced that he was soon graduating from middle school, news that was greeted by cheers from the audience.

Karen explained that part of graduating from 8th grade at Nueva School is declaring your passions. “Dylan picked sports and the Hospital,” she said. “He chose to put on a charity sports tournament that over 200 people attended and has raised over $42,000 for the Hospital.”

Circle of Friends was founded in 2007 by local residents Molly Gibbons and Ashley Riley. Today’s luncheon was chaired by Carson Eltoukhy and Katie Simpson (pictured above). The organization’s next event will be participating as a team in the 2nd annual Packard Summer Scamper.