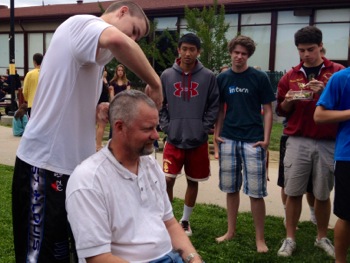 Nicky Mullen, who fathered the idea as a bet with the coach, decided on the hairdo to “honor the Mohawk Indians, who created the sacred sport of lacrosse.”

He added: “It’s also for intimidation. And because this is our first league title, we’re going to make the Mohawk a tradition for future championships.”

Article and photo from M-A Bear News; used with permission