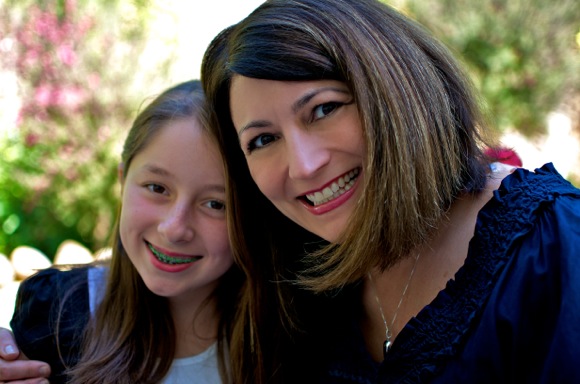 Update on June 14: Karla emailed that she just got word that Sky of Blue will be the exclusive letterpress holiday card line sold at Barneys New York stores on Madison Ave, Chicago, Dallas, Scottsdale and Beverly Hills.

When we first visited Menlo Park resident Karla Ebrahimi, her line of stationery, Sky of Blue Cards, was just taking off. It’s continued to expand with over 52 new cards added in since the first of the year. The company’s exhibit at the National Stationery Show in May sparked interest from a major speciality department store about carrying her line. And, she’s launched a new line of note cards with the assistance of her 11-year-old daughter Nathalie Camens.

The new “Concrete Poem Mini Note Card Collection” is a group of six cards that are concrete — or “shape” — poems about various fruits and vegetables. The poetry on these cards was written by Nathalie and illustrated by Karla. 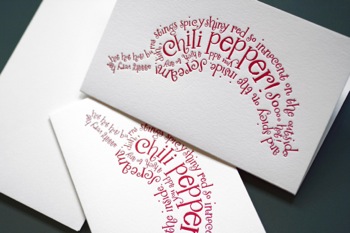 “About a year ago when my daughter was in the 5th grade, she came home and told me that they had learned about concrete poems,” said Karla. “She was so excited and quickly wrote a poem about an apple in the shape of an apple. We both had the same thought at the very same moment, which was: ‘Concrete poems would make great note cards!’

“Months passed by and we put the idea aside, knowing we’d get back to it one day. And we did! Recently, my daughter sat next to me in my design studio, thoughtfully writing poems about pears, pomegranates, bananas, pea pods, chili peppers, and lemons. Meanwhile, I would take her words exactly as she wrote them, twisting and turning the text into the shape of the fruit or vegetable the poem was about. It was an unforgettable experience for both of us.”

Nathalie said she’s written a couple of short stories and likes to read haiku but doesn’t think of herself as a poet: “But this was fun, and the words came pretty quickly.”

Will there be future colloborations? Karla’s not sure, but she has another child waiting in the wings. “My son is bugging me,” she said. “He wants to make cards with stuffed bears on them.”

Photo of Karla and Nathalie by Irene Searles