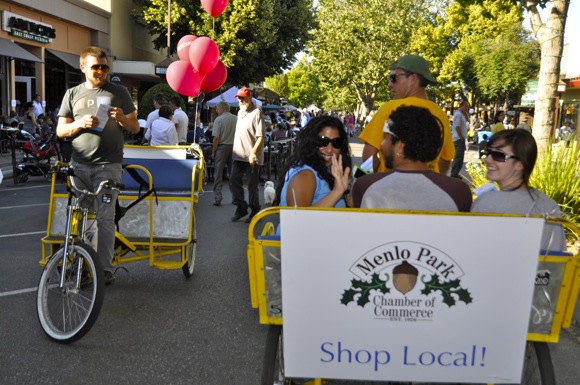 The first day of summer started officially just after 4:00 pm PDT yesterday, and the celebration began just an hour later at the downtown Menlo Park block party organized by the local Chamber of Commerce. Temperatures were in the balmy 80s, and after a walk up and down Santa Cruz Avenue from University to El Camino, we couldn’t help but wonder if there was a child under 6 at home anywhere in town. 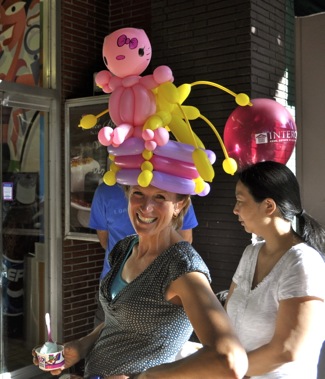 The sixth annual event always attracts the parents-with-young-children set with activities such as face painting (the lines were long at Joanne’s Facing Painting) and folks dispensing ballon hats and animals. But also roving the streets were “gangs” of young teens (are they ever in groups less than five?) and middle age to older folks out for an evening stroll and the chance to listen to a variety of musical sounds.

New this year were corporate/organization-sponsored pedicabs that were picking up people as far away as University Ave. near Middle and ferrying them to the party, where they picked up new customers for a ride down Santa Cruz Avenue. 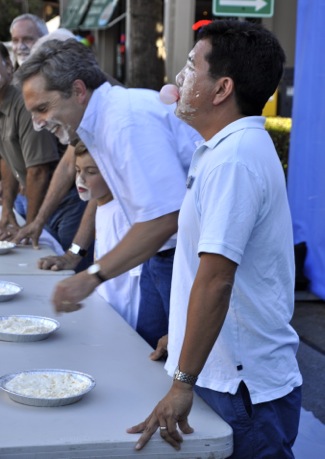 Also new was a community stage at the El Camino Real end of the party sponsored by Menlo’s newest corporate citizen, Facebook. Taking the stage around 6:30 pm were five current or former city officials — Alex McIntyre, Glen Rojas, Andy Cohen, John Boyle and Peter Ohtaki — who were joined by a 7-year-old volunteer from the audience, Michael, all gathered for the first block party pie-eating contest with a twist.

That twist being that once the participants were finished with the pie eating portion (which looked more like whip cream eating that actual pie), they had to blow a bubble from the gum found at the bottom of the pie dish. This proved more difficult that it would seem. Much gum chewing ensued with little bubble blowing until Peter Ohtaki managed to get a small but perfect bubble to appear, thereby emerging victorious. “I think it was trick gum,” he reported with a smile.

Amidst the frivolity and fun, there were opportunities for quieter moments, especially if you were canine. Carla Campbell was on site dispensing dog massages, which Colt Rosensweig‘s dog for thoroughly enjoying. 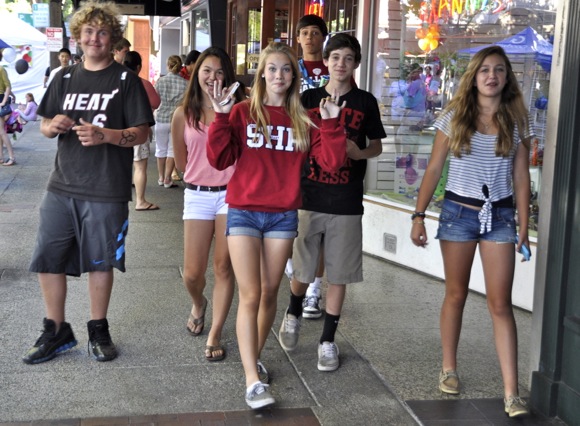 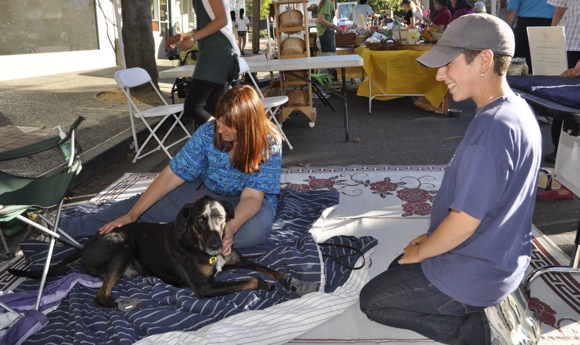 This was a super-fun event! Looking forward to the one in August.