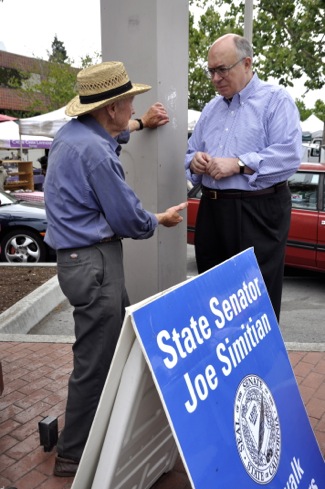 Menlo Park’s representative in the state Senate, Joe Simitian, was holding what he calls “sidewalk hours” at the Farmers Market this morning. Assisted by two aids, he was both hearing what was on constituents’s minds and answering questions about what was going on in Sacramento.

“The great thing about doing this is you hear about everything under the sun,” he told InMenlo, admitting that high speed rail was at the top of the list, given that a vote was likely later this week. “I’m hearing as many pros as cons,” he added, noting that the contents of the final bill has not be released.

There was a steady line to talk to the Senator, and the market was surprisingly bustling, given the upcoming 4th of July holiday and many locals out of town.