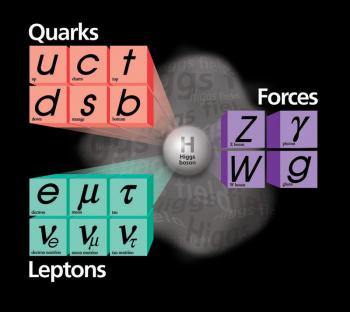 It was a little over two years ago that the Large Hadron Collider kicked off its search for the Higgs boson. But the hunt for the Higgs really began decades ago with the realization of a puzzle to be solved, one that involved more than just the Higgs.

The quest started with symmetry, the aesthetically pleasing notion that something can be flipped and still look the same. It’s a matter of everyday experience that the forces of nature work the same way if left is swapped with right; scientists found this also held true, at the subatomic level, for swapping plus-charge for minus-charge, and even for reversing the flow of time. This principle also seemed to be supported by the behavior of at least three of the four major forces that govern the interactions of matter and energy.

In 1956, Tsung-Dao Lee of Columbia University and Chen-Ning Yang of Brookhaven National Laboratory published a paper questioning whether a particular form of symmetry, known as parity or mirror symmetry, held for the fourth force, the one governing the weak interactions that cause nuclear decay. And they suggested a way to find out.

Experimentalist Chien-Shiung Wu, a colleague of Lee’s at Columbia, took up the challenge. She used the decay of Cobalt-60 to show that the weak interactions did indeed distinguish between particles spinning to the left and to the right.

This knowledge, combined with one more missing piece, would lead theorists to propose a new particle: the Higgs.

Where does mass comes from?

In 1957, another clue came from a seemingly unrelated field. John Bardeen, Leon Cooper and Robert Schrieffer proposed a theory that explained superconductivity, which allows certain materials to conduct electricity with no resistance. But their BCS theory, named after the three inventors, also contained something valuable to particle physicists, a concept called spontaneous symmetry breaking. Superconductors contain pairs of electrons that permeate the metal and actually give mass to photons traveling through the material. Theorists suggested that this phenomenon could be used as a model to explain how elementary particles acquire mass.

In 1967, Steven Weinberg and Abdus Salam put the pieces together. Working from an earlier proposal by Sheldon Glashow, they independently developed a theory of the weak interactions, known as GWS theory, that incorporated the mirror asymmetry and gave masses to all particles through a field that permeated all of space. This was the Higgs field. The theory was complex and not taken seriously for several years. However, in 1971 Gerard `t Hooft and Martinus Veltman solved the mathematical problems of the theory, and suddenly it became the leading explanation for the weak interactions.

Now it was time for the experimentalists to get to work. Their mission: to find a particle, the Higgs boson, that could exist only if this Higgs field does indeed span the universe, bestowing mass upon particles.

Concrete descriptions of the Higgs and ideas of where to look for it began to appear in 1976. For example, SLAC physicist James Bjorken proposed looking for the Higgs in the decay products of the Z boson, which had been theorized but would not be discovered until 1983.

By the ’80s, only the four heaviest particles remained to be found: the top quark and the W, Z and Higgs bosons. The Higgs was not the most massive of the four – that honor goes to the top quark – but it was the most elusive, and would take the most energetic collisions to ferret out. Particle colliders would not be up to the job for a long time. But they began sneaking up on their quarry with experiments that began to rule out various possible masses for the Higgs and narrow the realm where it might exist.

In 1987, the Cornell Electron Storage Ring made the first direct searches for the Higgs boson, excluding the possibility that it had a very low mass. In 1989, experiments at SLAC and CERN carried out precision measurements of the properties of the Z boson. These experiments bolstered the GWS theory of weak interactions and set more limits on the possible range of masses for the Higgs.

Then, in 1995, physicists at Fermilab’s Tevatron found the most massive quark, the top, leaving only the Higgs to complete the picture of the Standard Model.

During the 2000s, particle physics was dominated by a search for the Higgs using any means available, but without a collider that could reach the necessary energies, all glimpses of the Higgs remained just that – glimpses. In 2000, physicists at CERN’s Large Electron-Positron Collider (LEP) searched unsuccessfully for the Higgs up to a mass of 114 GeV. Then LEP was shut down to make way for the Large Hadron Collider, which steers protons into head-on collisions at much higher energies than ever achieved before.

Throughout the 2000s, scientists at the Tevatron made heroic efforts to overcome their energy disadvantage with more data and better ways to look at it. By the time the LHC officially began its research program in 2010, the Tevatron had succeed in narrowing the search, but not in discovering the Higgs itself. When the Tevatron shut down in 2011 scientists were left with massive amounts of data, and extensive analysis, announced earlier this week, offered a slightly closer glimpse of a still-distant Higgs.

In 2011, scientists at the two big LHC experiments, ATLAS and CMS, had announced they were also closing in on the Higgs.

Yesterday morning, they had another announcement to make: They have discovered a new boson – one that could, upon more study, prove to be the long-sought signature of the Higgs field.

The discovery of the Higgs would be the start of a new era in physics. The puzzle is much bigger than just one particle; dark matter and dark energy and the possibility of supersymmetry will still beckon searchers even after the Standard Model is complete. Since the Higgs field is connected to all the other puzzles, we will not be able to solve them until we know its true nature. Is it the blue of the sea or the blue of the sky? Is it garden or pathway or building or boat? And how does it truly connect to the rest of the puzzle?