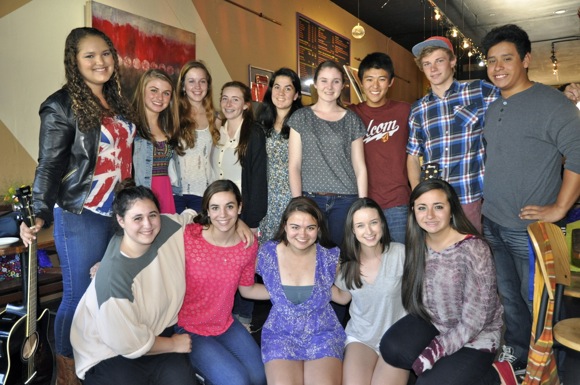 Melodies for Charities is a local, Menlo-Atherton High School-based music club with a twist. When it plays, community nonprofits benefit. Since its founding in 2010, the group has raised over $2,200 for organizations, including Second Harvest Food Bank, My New Red Shoes, and the Red Cross.

Founder Christina Takayama got the idea for the club she realized how much hidden musical talent existed at M-A.

“Melodies for Charities has two main goals,” she says. “The first is to give any student the opportunity to perform their music — we are not an exclusive club — and the second is to give back to the community through supporting various charities/causes.”

Musicians in the club are able to play their own style of music, representing a wide range of styles, including rock, classical, and jazz. The diversity of the club allows them to play different styles at different venues.

“We have musicians of all skill levels playing together,” says rising M-A senior Nicole Wong. “We have student painters who design and paint signs, teen artists who sell their creations at events, and people who love music who come out and support our students. Melodies is a jumble of creativity, something that brings the community together.”

Since it’s creation, the club has played at many venues around Menlo Park, including the Sunday Farmers Market and Café Zoe, where it was spotted on a recent Friday night. Melodies for Charities is never paid to play but instead accepts tips and donations. 100% of the proceeds go to a charity that the group chooses.

“They are an incredibly talented group of musicians,” says Café Zoe owner Kathleen Daly. “At times I thought I was listening to the original artists on some of the songs. They bring a great night of music to the Café every time they play here, and the effort to raise funds for social causes is awesome.”

Melodies for Charities also plays at locations such as the Ronald McDonald House and the Sunrise Senior Living Home and events such as the Save Every Slave Walk and Relay for Life Walk, both at Burgess Park. No money is raised at these appearances; the club views them as another way to contribute to the community

The club has made an impact on the lives of many students involved in it. “Being a part of Melodies for Charities has given me a chance to explore a new side of myself,” said senior Nicole. “Growing up, I  always wanted to sing but never had the courage. The support system at Melodies has allowed me to begin performing regularly.”