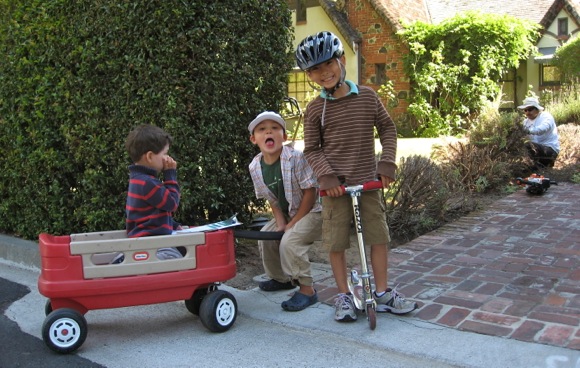 The most important change I made was to plant a “treasure chest” at a lot on each block. On each Huntopoly day, teams would gather on my driveway to 1) learn of the location of the treasure chest on their block, and 2) roll the fuzzy dice and move their Monopoly gamepiece to a house on their block. 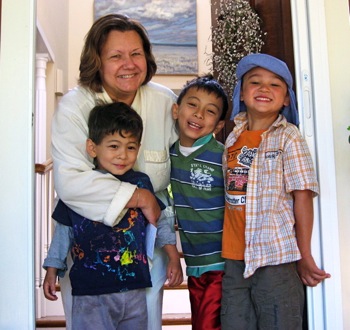 Then, each team fanned out in the neighborhood, first finding their treasure chest and taking out one toy each. Next they went to the house with their gamepiece and rang the doorbell. If a resident answered the door, they had to get a photo with the resident, have him or her answer some questions (e.g. “What’s something interesting about you that you’d like neighbors to know?”), and collect some items from the resident (e.g. an ingredient for baking a cake that they’d make another day).

If a resident didn’t answer the door, the team just went to the house next door. This was different from last year, when no answer at the door forced teams to come back to my house to roll the fuzzy dice and move their game pieces.

Teams got points for the things they got from the residents in their blocks. They also could get points for making a lego house and placing it at the lot where their gamepiece was.

I saw that three teams were going to finish within one point of each other, so I “engineered” a three-way tie. Thus, members of three out of the five teams — a majority of campers — won a first prize gift: a $10 gift certificate to Cheeky Monkey, a local toy store.

You can recreate this game in your neighborhood. While the mural map/gameboard is permanently painted on my driveway, you can create a gameboard using chalk on a smooth surface. You can find maps with lot lines and addresses at zillow.com.  Just draw the blocks out on your driveway (one per team of kids), the lot lines, and addresses.

Once you have these, find a gamepiece for each team.  I bought giant monopoly pieces online at greatbigstuff. However, any household trinkets will do. Then, find some dice — I bought big fuzzy dice at Amazon.  With the gameboard, gamepieces, and dice, you’re all set!
Photos courtesy of Menlo Park resident Mike Lanza, author of Playborhood
Category: