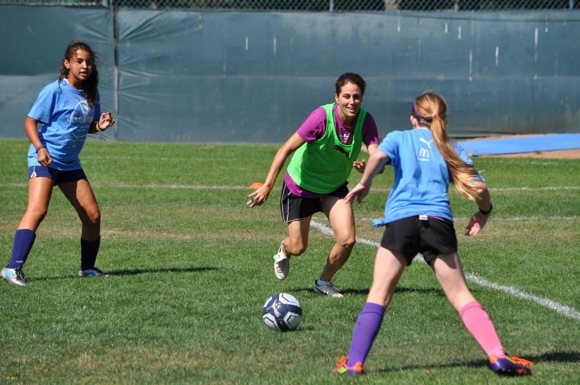 Eight years post retirement, Julie Foudy still exhibits the grace of the accomplished athlete she is. For the many locals who enjoyed watching her play during her Stanford years, she can also move the soccer ball down the field with competitors many years her junior. We caught up with her at the Julie Foudy Sports Leadership Academy (JFSLA) being held at Menlo College in Atherton this week.

She founded the Academy, which offers one-week programs for girls 12-18 in three locations across the country each summer, with husband Ian Sawyers in 2006. “My sense is that girls in this age group can still be very awkward in the sense that they don’t want to take risks or go beyond their comfort zone,” she said. “We use soccer as way to give them a voice. We also guide them in creating a service project that they can take back to their community and implement. My work with the Academy is like my third child, I love it so much.” (Julie and Ian are the parents of two children, Isabel — pictured with Julie— and Declan).

Attendees at last year’s three JFSLA camps participated in an online contest held earlier this year dubbed “Choose to Matter.” The four grand prize winners will be accompanying Julie to the Summer Olympics in London. 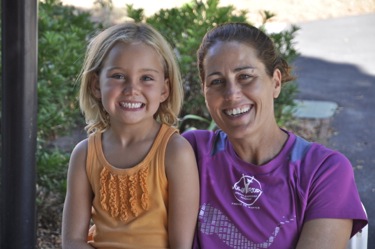 During her 17 years on the U.S. National Soccer team, Julie participated in four World Cups and three Olympics, winning two World Cup championships and two Gold and one Silver medal in the Olympics.

“The World Cup and the Olympics are two very different experiences,” she said. “The World Cup is an awesome tournament with the focus on just you and your sport. The Olympics, with its many different sports, is such a spectacle it’s almost surreal.”

Julie’s primary gig now is sports broadcasting. She’s off to London this week to cover the Olympics for ESPN/ABC. “I’ll be doing some feature reporting and appearing on Nightline,” she said.

Looking back, Julie said she played lots of different sports growing up but gravitated to soccer because she loved running around.

“I’ve always felt that the real gift of sports is that it teaches you so much about life — how to work with a group, how to deal with setbacks and adversities,” she said.

“The accolades and gold medals are nice. But, what I really treasure is that I got to hang out with an amazing group of women for so many years.”