Two dozen teams, including SRI International, are participating in this year’s Relay for Life in Menlo Park 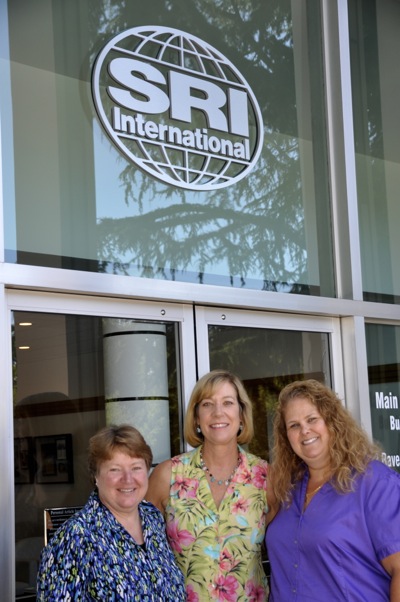 One of the largest teams at the American Cancer Society’s Relay for Life, taking place at Burgess Park today and tonight, is the group from SRI International, which is also a long time participant.

“We first took part in 1996 when the event was at the Cow Palace,” explains Sally Longyear (pictured middle), who’s worked at SRI for the past 26 years. “We actually slept during the overnight shifts where the livestock get stabled.”

Like this year’s co-team captain, Erin Coley (pictured right), Sally lost her mother to cancer. “I walk because I want there to be fewer motherless daughters,” says Sally.

Relay For Life events are organized to celebrate the lives of people who have battled cancer, remember loved ones lost, and fight back against the disease. Highlights include the survivors’ lap, the lighting of luminaries after dark to honor specific people, and the concluding “fight back” ceremony where people make future pledges to combat the disease.

“The Relay is not the only way SRI participates in the Menlo Park community, but it is a very visitbe one,” says Erin, who is partnering with Roy Kornbluh as team captain. Along with team members, they’ve raised close to their $10,000 fundraising goal.

The Relay for Life begins at 10:00 am this morning and continues for 24 hours. Like other teams, the 14 members of the SRI team will take turns walking the route. During the dark hours, the luminaries light their way.

“The coolest time to walk is 4:00 in the morning,” says Sally. “The late night people are asleep and the early risers aren’t up yet.”

Adds teammate Terri Corcoran (pictured left), who joined the team because she wanted to get involved in the local community: “The middle of the night is also a good time to reflect on why we’re all there walking.”

People interested in supporting SRI or another Menlo Park Relay for Life team can do so online.