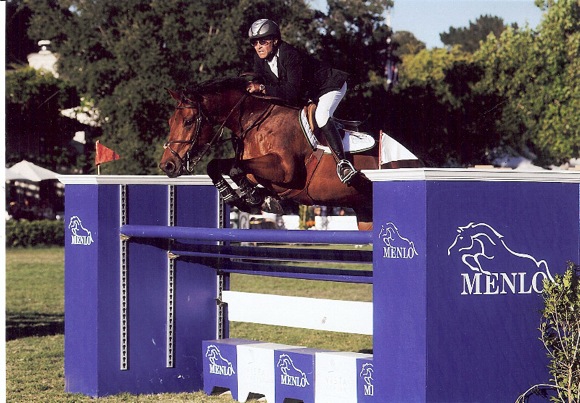 Only two days after the entry forms for the Menlo Charity Horse Show were posted, over 500 of the West Coast’s top equestrians responded, thereby assuring that the competitive slots would once again be filled.  “We made over $100,000 in necessary improvements this year, including putting down new footing in the jumping arena and purchasing brand new jumps for the hunter ring,” said Betsy Glikbarg of Atherton, founder and co-chair of the event. “The word got out, and once again, despite the economy, competitors were scrambling for the chance to participate.

“In this Olympic year, I’d like to remind people that they don’t have to travel to London in order to watch international caliber equestrian events.  We have it all, including several former, as well as hopeful, future Olympic riders, right here in their own back yard.”

Scheduled for August 7 to 12 at the Menlo Circus Club, 190 Park Lane in Atherton, the show features non-stop jumping competition in three arenas from sunrise to sunset daily. Recipient of national, as well as international recognition in the past, including being cited as “One of the Best in North America,”  horse show organizers were informed by The U.S. Hunter Jumper Association that, after careful scrutiny, the event had been selected to be the first in Northern California to be authorized to present a $10,000 International Hunter Derby Competition this year.

Dr. Daryl Hoffman of Atherton has donated the stake for this proving ground for both horses and riders, which is designed to provide more challenging courses in order to create more spectator interest in the Hunter arena.  This will be one of the first such competitions in 2012, and winners will qualify for the 2013 championships and could then go on to compete in similar international challenges.

Other highlights of the event are:  Friday evening’s $10,000 Kew Farm Ryman Memorial Speed Jumping Class, Saturday evening’s $40,000 Menlo Grand Prix and Saturday afternoon’s Lead Line Class, in which children (under 6), mounted on horses of all breeds and sizes, are led into the arena (many for the first time showing) by an adult.  In this perennial crowd pleaser, everyone is a winner and each rider takes home a blue ribbon.

Once again, the horse show benefits Vista Center for the Blind & Visually Impaired which is dedicated to the premise that enables “clients to achieve their highest potential through programs that promote independence and improve the quality of life.” In 2011, The Menlo Horse Show raised over $400,000 for the Center, which serves clients in San Mateo, Santa Clara, Santa Cruz and San Benito Counties.

Tax deductible tickets for the Menlo Charity Horse Show are $10 per day, available at the gate.  A six- day pass can be purchased for $35. Children under 12 and adults over 65 are admitted free.  There’s ample on street parking with free shuttle service to the grounds provided.  For further information and schedules is available online,  or telephone: 650-701-0543.