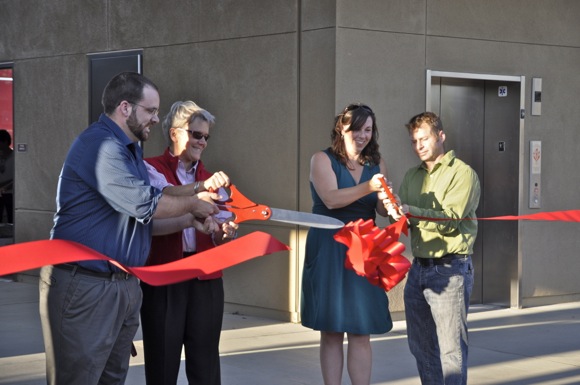 When Grady Burnett, Vice President of Online Sales Operations at Facebook (pictured below right), handed over a check for $96,000 to Principal Matthew Zito at the dedication of Menlo-Atherton High School’s new Digital Media Arts Center last night, he did so with particular pride. Not only is Grady a graduate of the high school, but his parents, Marge and Jerry, were instrumental in founding the Foundation for the Future, a funding source for academic programs at M-A and the actual recipient of the Facebook grant, 20 years ago. 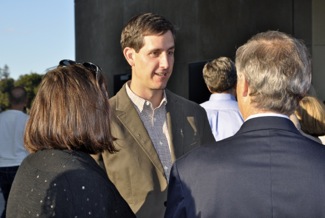 “Jerry’s contribution is extraordinary,” said Foundation Executive Director Cindy Folker. “He served on the Board for five years and by then, all of his children had graduated.”

Added Grady in his remarks, “I have a legacy to fill, not only as a grad but as son.”

According to Zito, the new 10,000-foot, two-story center was built at a cost of about $6 million, about half of which came from a state of California grant. Additional capital came through the passage of bond Measure J. “With every project we are another step closer to a 21st century campus,” he said. “We’ve made enormous strides in the past 15 years, but we’re not done yet.” 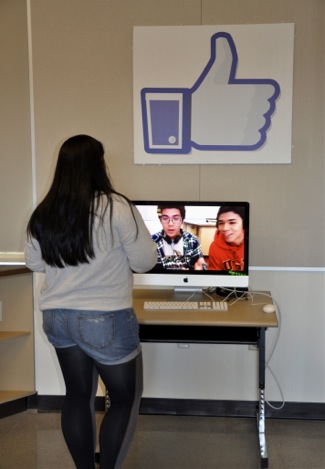 The Facebook grant covers the cost for computers in what is being called the Facebook Media Lab (pictured bottom). “It’s actually the video production lab,” explained Facebook Community Outreach Manager Lauren Swezey. “The reason for the donation is not just our interest in technology but also in education.

“Another priority for us is supporting our immediate neighbors in Belle Haven. M-A serves that student population as well as the kids in west Menlo. It’s truly a community school.”

In addition to the video production lab, there are two digital media labs and one digital photography classroom. A general classroom for computer academy students is also housed in the new building, which opens out to the adjacent football field.

According to Lauren, Facebook is interested in forming an ongoing relationship with M-A. “That might take the shape of mentoring or some other kind of volunteering,” she says. “We obviously have a lot of resources in our employees and it makes sense for us to involve them with the local high school. And, it’s something many of them want to do.”

The official ribbon cutting was done by the three teachers who will make the new Center their home  John Giambruno, Betsy Sergeant Snow, and Michael Tillson accompanied by non-classroom teacher  Inez Paepcke, who was representing Paul Snow, Chris Rubin and John Dumanske. In Mr. G’s classroom, visitors could watch a video of students thanking Facebook for the computers in the classroom (above right). 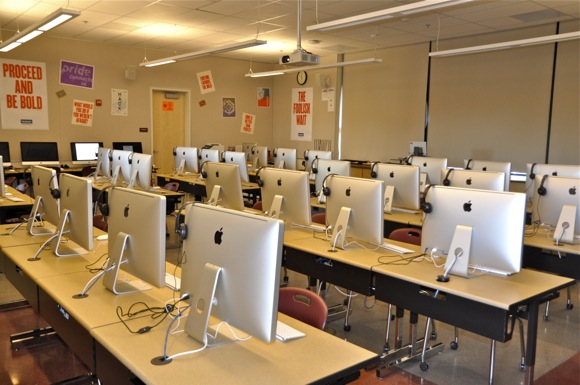