Budweiser Clydesdales get a taste of Woodside but, alas, make no public appearances 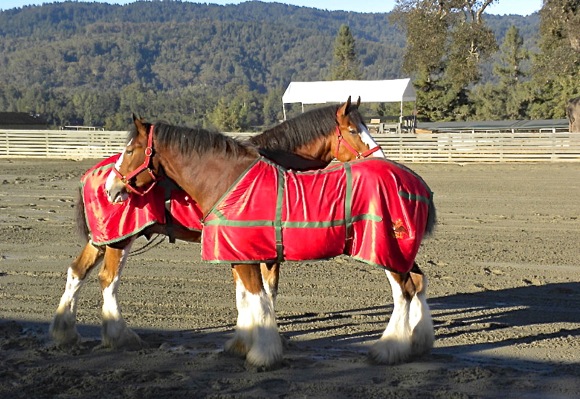 For the past two weeks, equestrians at The Horse Park in Woodside have had the pleasure of watching some of the best-known advertising icons in the world, the Budweiser Clydesdales, frolicking and basking in the sun in the paddocks at the facility which is located at the corner of Sand Hill and Whiskey Hill Roads. The horses were brought here in anticipation of appearing at the San Francisco Giants World Series Games, but an unfortunate glitch in the city’s permitting process kept them from performing there or at the ensuing, celebratory parade. 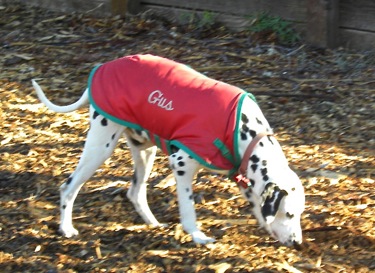 Nevertheless, the 10 horses, their six handlers, and Gus —the ever-present and mandatory Dalmation attired in a coat which matched those of his equine buddies — had a wonderful temporary respite from their constant travels around their company’s western zone which covers several states.  According to Roman Raber, Assistant Supervisor of the team, these gentle giants’ weight averages 2,000 to 2,200 pounds, about double that of the average saddle horse, and four of them stand over 19 hands high (over 6 feet from their feet to the top of their shoulders). Each one eats a healthy serving of grain and 30 to 40 pounds of timothy hay every day.

Raber says the horses are extremely docile and compliant. The animals are so large that it takes a well coordinated team 25 minutes to harness eight of them, and then hitch them up to the red and gold Budweiser wagon. Potential drivers are constantly in training to learn how to handle the almost lost art of driving with four reins (lines, in horse parlance) in each driver’s hand, which run to the bit in each horse’s mouth.

Needless to say, it was a memorable experience for all those who had the opportunity to mingle with these majestic animals, as well as with their keepers. As the three huge vans pulled out of the Horse Park on the foggy morning before Halloween, a bevy of new fans gathered to wave goodbye and to wish both handlers and horses a safe journey on the way to their next stop and performance in Las Vegas. 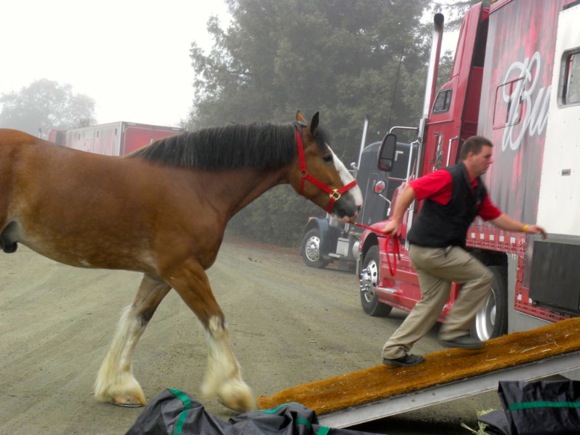