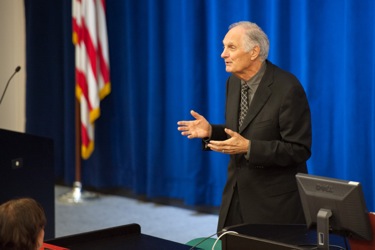 Actor and writer Alan Alda is in a long-term, committed relationship with science, and he wants everyone to join him.

Recently, the award-winning actor and writer captivated a Panofsky Auditorium crowd at SLAC in Menlo Park with tales from his love affair with science and tips for scientists on how to capture the affections of the public.

Communicating science effectively is a subject dear to Alda’s heart; he hosted the PBS show Scientific American Frontiers for more than a decade, and helped establish Stony Brook University’s Center for Communicating Science, which is dedicated to helping scientists and health professionals communicate about their research more effectively with the public.

The former “M*A*S*H” star was visiting SLAC as part of a two-day workshop hosted by the Kavli Institute for Particle Physics and Astrophysics (KIPAC). The workshop – underwritten by the Kavli Foundation and attended by 34 scientists from SLAC, Stanford and KIPAC – used improvisational theater exercises and other inventive techniques to help participants connect with their listeners and speak about complex science in ways non-scientists can understand.

Alda’s chief concern is that the public is on a perpetual “blind date with science,” a blind date that often leaves both participants wishing for a quick way out. It all comes down to the theory of the Three Stages of Love, said Alda, “Although you may not have heard of that theory, because I made it up.”

First stage: attraction. Scientists need to make the effort to connect with an audience, whether it’s a single interviewer or a crowded auditorium.

Second stage: emotion. Audiences remember what makes them feel, said Alda. Translation for scientists: allow your own emotions, your love for your work, to come through.

Third stage: commitment. “This is the only stage where you actually have to talk to your partner,” Alda said. Scientists discussing their research must remain committed to reaching the audience. “The public are your partners. You have to have good communication with them.”

Alda’s entire talk demonstrated the effectiveness of his ideas. He easily captured the hearts of his audience, whether talking about his brush with death on a Chilean mountaintop, his discussion of evolution with his grandson, or his interview with noted biologist Eric Lander for Scientific American Frontiers.

Alda described how he grew so frustrated with his inability to understand Lander’s research that he actually leaned forward, grabbed the biologist by the cheeks and exclaimed, “Eric, I don’t understand!” Over laughter, Alda continued: “Fortunately, Eric was a good-natured fellow.”

When asked why he focused on improving science communication, Alda left the jokes behind. “To me, science is like poetry. It’s beautiful,” he said. “I’m talking about science because I love it and I want other people to love it, too.”