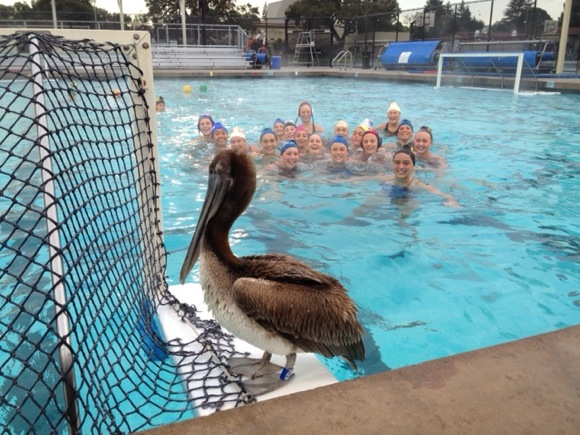 Recently, an unexpected visitor showed up at the Menlo-Atherton High School pool while the girls water polo team was in the middle of practice. The visitor was a 30 or so pound pelican.

“When the pelican came into the pool it was a little scary,” said sophomore Fiona Jackson, “It came right next to us.” She said that her teammates, junior Ivana Petani and freshman Sarah Reichow, vigorously swam to the other side of the pool to get away from the bird.

“I thought it was hilarious,” said Coach Chris Rubin, “I have been around pools a long time and I have never seen a huge pelican dive into a pool with 30 girls!  I suppose the good news is that since we were using four cages in the pool, it was nice to have a fourth goalie (instead of the usual three)!”

The players noted that the pelican, named by the team ShawnDeLon, was not scared of the water polo ball being thrown at it. It was even less frightened by Coach Rubin trying to whistle it away or Coach Laura Duran shooing it away with a towel.

“ShawnDeLon wasted about 10 minutes of practice, so I was grateful for her!” Jackson added.