How often can you attend a play — and eat dinner? That’s what happens during the Menlo School production of The Wedding of the Year, which has three performances this weekend.

“We start out in the Florence Moore Theatre, which is transformed into a wedding chapel,” explains drama teacher Beth Orr. “Then, the bagpipes lead us to the new Creative Art & Design Center for the banquet. There will be tables set with flowers just like a real wedding banquet. Some of our Moms have even made us little bags of Jordan almonds. We promise lots of interaction between the actors and the audience.”

The play’s premise is that the Fantastikini family of New Jersey is hosting their oldest son’s wedding to the daughter of the Tenchmores of Atherton. The food is Italian, and the entertainment is provided by the Rat Pack Band. While the first act (wedding) is largely scripted, the second act (banquet) is improvised.

Nicki Williams plays the mother of the groom. “She’s clingy and sad and sings Ava Maria in the toast,” Nicki says. “She’s fun to play.”

The bride, Buffy, as played by Nicole Crisci, is a bit of a stereotypical Atherton girl. “That’s the challenge,” says Buffy, “being uptight and snobby and still finding the right balance of what’s funny and not going too over the top.” 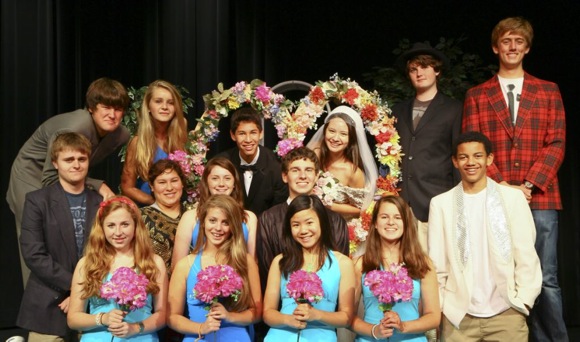 As the groom, Jordan Vasquez struggles to keep both his bride and Mom happy. “I’m pressured to join the family business while at the same time urged to leave it behind,” he says. “The way I get through it is by adding in a lot of jokes.”

Senior Ryan Bowman is appearing in his seventh production at Menlo, not counting improv shows. He considers acting his extra-curricular activity and plays the grandfather Enzo in “Wedding.”

“It’s interesting playing an older person,” he says. “When Beth was casting, she knew there would be a bride and groom but not who the other characters would be. So, for my audition, I came up with this old guy from Sicily who gripes about things. The role changes each time I do it. That’s the thing about improv, it keeps you on your toes.”

The two evening performances on Nov. 16 and Nov. 17 are sold out. $10 tickets for the Saturday matinee at 2:00 pm remain and can be reserved by emailing tickets@menloschool.org

Photo of cast in costume by Paul Gralen; photo of class in rehearsal with Beth Orr and Jan Chandler by Linda Hubbard