NASA research scientist talks about life on Mars on Nov. 19 in Menlo Park 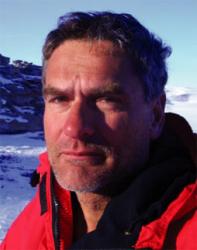 The Nov. 19 SLAC Colloquium will feature NASA research scientist Chris McKay, who will discuss the current status of the search for organics in Martian soil and the prospects for determining the habitability of the planet. His talk on Monday, which will also serve as an update on the Mars Curiosity rover’s mission, begins at 4:15 p.m. in Panofsky Auditorium on the SLAC campus in Menlo Park. Refreshments will be served beforehand at 3:45 p.m.

The rover has been on Mars for 100 days, and McKay says that if organics are found, the next challenge will be to determine if they are of biological or non-biological origin. McKay has traveled to dry valleys in the Antarctic and to Siberia, the Canadian Arctic and the Atacama, Namib and Sahara deserts to study life in these Mars-like environments.

McKay is based at the NASA Ames Research Center, and he currently researches the evolution of the solar system and the origin of life. He is also actively involved in planning for future Mars missions including human exploration. He was a co-investigator on the Huygens probe to Saturn’s moon Titan in 2005, the Mars Phoenix lander mission in 2008, and the current Mars Science Laboratory mission (2012).

SLAC colloquia are intended for a general audience and are free and open to the public.