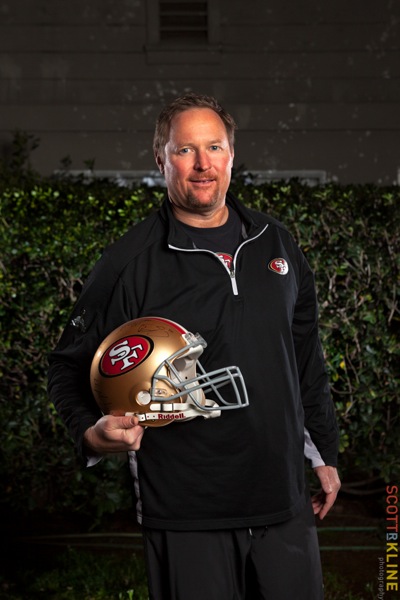 During the 49ers run to the Super Bowl, a flag appeared outside one West Menlo Park home. Put there by the kids who live there, it was a way to cheer on their Dad, Tim Drevno, who for the last two years has been the offensive line coach for the San Francisco football team.

Tim admits he’s been pretty much a “football guy” his whole life. “I’ve played since I was a little kid,” he says. “After college, I wasn’t good enough to play in the pros, so I took up coaching. I love sports and love competing. For me, sports is a roadmap through life.”

Along the way, he met 49ers head coach Jim Harbaugh, who he coached under first at the University of San Diego and then came north to work with at Stanford. When Harbaugh took the 49ers job, Tim became part of his coaching team. “I first met Jim in 2004 and have been with him ever since,” he says. “He’s a great guy and a great football coach. He thinks outside of the box every single day and is a tremendous evaluator of talent.”

Tim and his wife Shannon bought their Menlo Park home when Tim was coaching at Stanford. “It was great working there,” he says. “I’d ride my bike to work over the San Mateo Drive bike bridge.”

The move from the collegiate ranks to the pros has been fairly seamless for Tim, some of that due to having the same boss. He does see distinct differences: “One of the biggest is that you have the players all day from 8:00 in the morning to 6:00 at night. And they really know the game. You can learn a lot from them.”

Not surprisingly, the Super Bowl loss still stings. “I can still see the confetti of the Ravens colors raining down from the ceiling,” he says, “and remember just wanting to get out of there. But we have a really talented team and work hard implementing the blueprint for 49ers football.

“Our scout work hard at getting players who not only do the right thing on the field but also away from the field. Guys who come to work every day wanting to get better, that listen to their coaches and to each other. Guys who check their ego at the door.

“Of course our goal is to get back to the Super Bowl — and to win it. Why would you be in the NFL if that’s not what your goal is?”